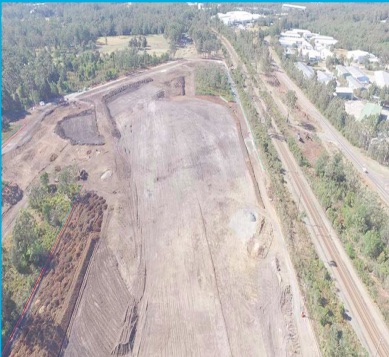 The cleared area at Kangy Angy has been described as a moonscape and an open cut mine. Archive 2018

The Community Environment Network (CEN) has called on the broader community to support the Kangy Angy residents who continue to fight the environmental destruction being caused to make way for the NSW Government’s intercity train fleet maintenance facility.

CEN Chairman, John Asquith, said: “As the destruction of local ecosystems is pushed through by the State Government, Kangy Angy residents continue to maintain their vigilance. “In 2003, academic, Dr Glenn Albrecht, created a new concept called ‘solastalgia’. “He has described it as ‘the pain or sickness caused by the loss or lack of solace and the sense of desolation connected to the present state of one’s home and territory’.

“It is the ‘lived experience’ of negative environmental change. “It is the homesickness you have when you are still at home. “It is that feeling you have when your sense of place is under attack. “Not only the Kangy Angy residents, but many people from across the Coast, are experiencing a deep sense of loss as this site begins to resemble a moonscape. “Support the residents in their efforts to stop further environmental destruction,” he said.