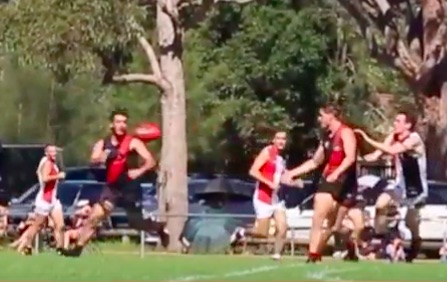 Round 17 of the Black Diamond AFL Cup saw a determined Killarney Vale Bombers side overcome the Gosford Tigers at Adcock Park 13.14.92 to 6.12.48.

The Bombers’ big three, Tim Oosterhoff, Brendan Lewis and Josh Mifsud, were the difference, with their class a standout, in a match that had plenty of skill errors. Killarney Vale were able to take a 14 point lead into half time, with Liam Banfi eld’s three goals proving a focal point up forward, in an engaging battle with the Tigers’ leading defender, Scott Burkinshaw. An early goal to, Adam Miller, for the Tigers, gave them the lift they needed. However, that was their only major from 10 scoring shots, and in the end, that proved costly, as the Bombers were able to gain control and pull away in the last quarter to win by 44 points. Apart from the big three, Banfi eld, Ben Simpson and Lachlan Waters, were amongst the best for the Bombers.

Four weeks ago, Wyong Lakes’ season was on life support, however next week, the Magpies will take on Gosford in a battle to claim the last finals berth, full of confidence on the back of a 21.9.135 to 1.7.13 win over Lake Macquarie at Tulkaba Park. It has been a long year for the Dockers, however while they gave their all, they just did not have the talent or experience across the park to match Wyong Lakes, who dominated the contest from the outset. Jarred Cross continued his excellent goal kicking form finishing with 6 goals, whilst the returning, Justin McPhan, shook off the rust to finish with five goals. Aaron Laksa, Carter Jones and Brayden Tos were other Pies to stand out.