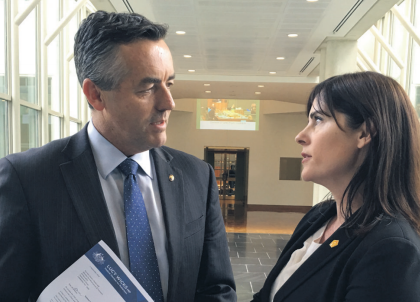 Labor’s promise of $15m to build three commuter car parks across the Central Coast is a gross under-estimate of the costs involved, according to the Member for Robertson, Lucy Wicks.
Lucy Wicks said Labor couldn’t be trusted to deliver the promised $15m for local commuter car parking because a plan for such parking does not even exist.
Central Coast Council have confirmed that its 2018/19 operating budget includes an allocation for developing a car parking strategy.
“Bill Shorten came to the Central Coast, stood with the Labor Candidate for Robertson, in front of our hard-working commuters and promised $15m for a parking plan that doesn’t exist, with money he doesn’t have,” she said.
“I commend Central Coast Council on allocating funds towards developing a car parking strategy for the Coast, but developing a car parking strategy over the coming year is different to having one ready to go, costed at $15m.
“Labor has not spoken about this with the NSW Government, which provides commuter car parking, because they have no intention on delivering on their promise.
“If they had contacted the State Government, they would know that $300m would barely deliver 10 new multi-storey car parks across NSW, and will only build half a car park here on the Coast.
“Labor has wildly underestimated the cost of this project and Bill Shorten’s promise is just another thought bubble, not a real plan.
“Locals are tired of hearing empty promises from Labor.
“The Central Coast deserves better.”