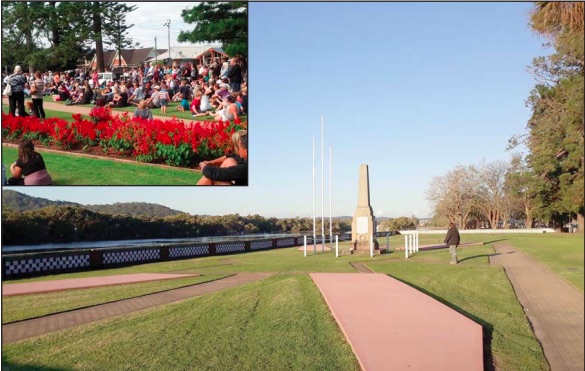 The concreted slabs have replaced flower beds in the War Memorial garden at Woy Woy Inset: The former flower bed in full bloom behind the memorial

Central Coast Council has concreted over flowers planted in the shape of the Australian flag in the Memorial Garden in Woy Woy. The flowers have been replaced with coloured concrete slabs.

“Maybe they will paint flowers.” Cr Jeff Sundstrom said he had made ward councillors aware of the issue along with the Mayor Cr Jane Smith and Council acting director Mr Boris Bolgoff. In a written statement, Council chief Mr Gary Murphy said the concrete was installed because the plants were “continually affected” by salt “through sea spray and diffusion through the soil”.

The garden in Brickwharf Rd which contains Woy Woy’s cenotaph is adjacent to the Woy Woy Channel. “This has significantly affected the survival rate of plants in the garden bed, often leaving the gardens sparse or bare,” he said. “In addition, the popularity of Anzac celebrations at the site is increasing and the area is unable to effectively and safely accommodate the rising crowds.” Mr Murphy said the Woy Woy and Ettalong Returned and Services League sub-branch had “agreed that by concreting these areas it will provide more room for people to attend due to the reduced risk of trampling garden beds”.

According to the Register of War Memorials of NSW, the site was dedicated as a Soldiers Memorial Park by NSW Governor Sir Philip Game in 1932. It commemorates those from the district who served in the various conflicts in which Australia has been involved. It was originally erected in memory of the fallen and those who served in World War I. Those who died in World War II were added.