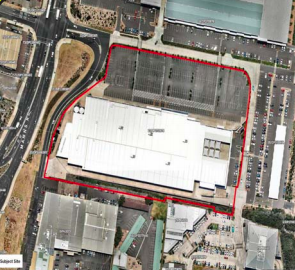 The Riverside site, including the former “Masters” building, located at Mann’s Rd, West Gosford, has been given the green light by Council to triple its maximum floor area and continue to be used for bulky goods retail.
Central Coast Councillors resolved to support a proposal to increase the maximum floor area from 10,700 square metres to 32,870 square metres.
This modification of the floor space is considered to be an appropriate use of the former “Masters” building, as it provides flexibility to respond to future outcomes of the Southern Growth Corridor Strategy, as well as regional retail and employment land supply studies, according to Central Coast Mayor, Jane Smith.
Part of the additional “bulky goods premises” floor space of 22,170 square metres is proposed to be utilised within the former “Masters” building (13,261 square metres) and the remaining (8,909 square metres) will be used within the existing Riverside building (and might include an additional storey within the existing building as part of the fit out) and potentially new buildings within the existing carpark areas.
Mayor Smith said the additional ‘bulky goods premises’ floor space would encourage activation of this dormant site and potentially bring employment opportunities.
“The site is located within the Southern Growth Corridor, which is designated as a priority location for future jobs, services and business growth within the southern half of the region,” she said.
“Bulky goods retail is a logical land use for this site, with surrounding areas to the north and south of the subject site transitioning to become a bulky good retail hub.
“This expansion in an already busy retail hub, could potentially create 150 to 200 jobs on the Coast, and flow on effects to the local economy.
“Council is committed to driving employment and growth as we create a vibrant and sustainable Central Coast,” Mayor Smith said.
The Masters building is part of the Riverside site, which comprises 6.7 hectares of land between Manns Rd and Narara Creek and consists of large-scale warehouse buildings.
The site was zoned IN1 General Industrial under GLEP 2014, with additional permitted uses, including bulky goods premises (10,700 square metre maximum) on the northern part of the site and business premises (1560 square metres) within the undercroft area of the former Masters building.
The applicant had previously proposed rezoning the whole site to B5 Business development, including the adjacent Hometown site, but they withdrew that request because it was not supported by Council.
Modifying the existing maximum floor space requirement … to increase the floor space limit for “bulky goods premises” to 32,870 square metres, was considered to be a more appropriate planning response to facilitate the proposed reuse of the former Masters building, as it provided flexibility to respond to any actions arising from the Southern Growth Corridor project.
According to a staff report to the July 9 Council meeting: “The former “Masters“ building has been vacant for over 16 months.
“It will also enable an additional potential 150-200 local jobs to be created.
“Bulky goods retail is a logical land use for this site, because surrounding areas to the north and south of the subject site are transitioning to become a bulky goods retail hub.
“The site is also well located on a major road which makes it highly suited for bulky goods format retailing.
“The existing former “Masters” building is also considered to be highly suitable to be retrofitted to accommodate bulky goods format retailing, due to the size of the building and suitability of the existing carpark to support the change in land use.
“As a land use, “bulky goods premises” also generate less traffic than “hardware and building supply outlets”.”