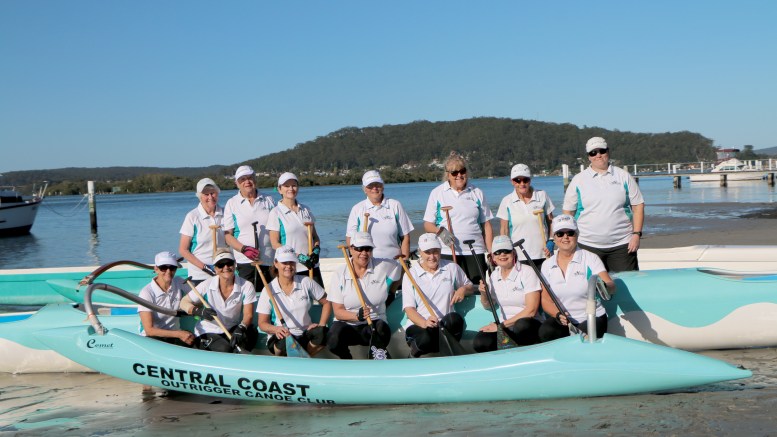 Members of the Central Coast Outriggers Canoe Club departed for Tahiti on July 15 to participate in the Club World Championships at the Va’a World Sprints.
Club president Ms Virginia Westerson said two groups of six competitors from the Woy Woy club had been training for seven months and had been in full preparation mode since competing in the Nationals in Queensland in February.
The club is located on land next to the sea scouts at Lions Park Woy Woy a location recently made permanent by Central Coast Council along with a $20,000 grant.
Ms Westerson said the inclusive club loved competition but was also about social contact, inclusion and general wellbeing.
She said there were six positions in each dragon boat.
“The boat sings when everyone is in sync.
“You can feel it. It really lifts you to another level, like a meditation,” she said.
The club was leading NSW in adaptive paddling.
Many of its gold members aged 60 to 70 years and platinum members aged over-70 had “ability issues”.
One is legally blind. Some are using it as cross-training for rehabilitation.
Platinum member Ms Maree Battye, who will compete in Tahiti, said she had just recovered from 12 months of chemotherapy and was a stroke survivor.
The club welcomed of new members but all have to complete a self-rescue and adhere to strict safety rules.
“Hard core racers are challenged by long course and international races but a new novice or ultra short race has been introduced to reinvigorate the social paddlers and give others an introduction to racing,” said Ms Westerson.
“Our club was formed in 1997 by an enthusiastic group of paddlers united in their shared love of outrigger paddling.
“We have grown considerably and now boast a mixed membership of social and competitive paddlers, incorporating at times those disabled by stroke, chronic pain, musculoskeletal injury, recovering from cancer, vision and hearing impaired, and amputees.
“The club has almost 60 members with ages spanning 30 years to 80 years, all actively involved with paddling.
“One of our members at 78 years was the oldest competitor at the 2017 Motu2Motu 36km marathon changeover race at Aitutaki, Cook Islands, with her international team winning the race.
“The sport has encouraged tourism in the Central Coast region through hosting race regattas and events in our local area over several years including State titles at Patonga in 2013, and the most recent held in January at Ettalong.
“Our canoes are located at Woy Woy Point and Patonga.
“Both sites are approved by Council in what are considered safe storage areas.”
The club regularly holds “come and try” open days as an introduction to the sport.