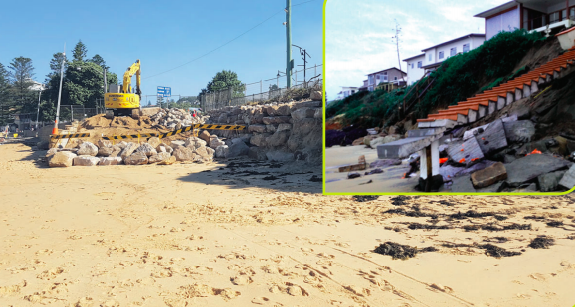 A cost-benefit analysis for the management of Wamberal Beach, prepared for the NSW Office of Environment and Heritage, concludes that building a revetment wall to protect 60 properties could leave the beach unusable by 2064.

Coast Community News has obtained a copy of the final report, prepared for the NSW Government by Marsden Jacob Associates, which, Councillor Jilly Pilon, requested Council staff release to the public in May. It still had not been published on Council’s website when Coast Community News went to press on July 4, and Clr Pilon said she had been told it, and a document about the clean-up of asbestos on Wamberal and Terrigal Beaches, was now expected to be pro-actively released within “the next few days”.

“A range of structural engineering approaches have been considered to protect beachfront properties and other infrastructure at Wamberal Beach and the surrounding lagoon properties from the effects of coastal processes,” the cost benefi t analysis said. “However, these options in isolation are unlikely to provide complete protection from these effects and, in the longer term, sea level rise may have a more serious impact on properties at Wamberal Beach, and especially around Terrigal Lagoon.
The cost benefi t ratio and net present value of eight options, compared to a base case of “business as usual”, were considered. “None of the engineering options considered is expected to provide a net public benefit t for the local community and for visitors to the area,” it concluded. “Only a Planned Retreat option provides greater benefits than a continuation of the current approach of no specific c managed intervention. “The net cost imposed on residents, visitors and other parties from the loss of the beach and construction of a seawall exceed the net benefi ts stakeholders would receive from the effects of a seawall.” The key beneficiaries from the construction of a seawall would be around 60 Wamberal beachfront property owners.

The cost of sand replenishment was considered too high, so replacing sand lost as a result of a seawall was not considered economically viable, although that could change if alternative sources of sand became available.

“The speed with which the beach will be lost will vary depending on the type and physical location of the seawall,” it said. “A rubble mound revetment is likely to result in near immediate loss of most of the beach in winter, based on the extensive assumed plan footprint and alignment of the wall. “Vertical seawall designs have a much smaller plan footprint, but the characteristics of the wall result in increased reflection of wave energy and general lowering of the beach for longer periods following storms, compared to rubble mound structures. “It is not certain which alternative form of protection (and alignment) considered would result in the fastest loss of the useable beach in the absence of sand nourishment, however under these circumstances, it is expected that the value of the beach for recreation will be near nonexistent by 2064. “Options with a seawall plus beach replenishment are likely to prolong beach use compared to seawall-only options. “However, rising sea levels mean that by 2064, the value of the beach for recreation will be similar to seawall-only options.”
The loss of the beach would impact negatively on the local community and visitors, local businesses, including Terrigal businesses, and property values, the cost-benefit analysis concluded. It estimated that 32 per cent of the beach-front properties potentially protected by a seawall at the expense of the beach were only occupied occasionally, as they are holiday homes. “The trade off from protecting beachfront properties with a seawall plus beach replenishment would be to delay when loss of beach visitation will commence, however, this is offset by the additional cost of beach replenishment,” it said. Over the very long term, Wamberal property values would be negatively impacted by increased flooding from sea level rise, “which will result in the inundation of many, if not most, properties surrounding Terrigal Lagoon, the loss of Wamberal Beach and impacts on Council assets such as water, electricity, sewerage and roads. “More properties in this area are likely to experience greater damage and loss of property values from the increased f ooding of Terrigal Lagoon associated with sea level rise.
“A seawall along Wamberal Beach will not mitigate the risk of this inundation round the lagoon, but will only mitigate the risk of damage to properties sitting on the Wamberal Beach dune.” According to the analysis, the risk of damage to those properties is largely allayed if the house has piled foundations to bedrock (20 properties), so sand can be eroded from under the properties during storms, and “will only involve utility reconnection costs”. Planned retreat by managing the duration, type and intensity of future development within the coastal hazard zone was found to be the only option with a positive net present value. The cost benefi t analysis was supposed to be preliminary research to inform a more detailed study of options for the area.
Source: Final report, Aug 2017 Marsden Jacob Associates, Wamberal Beach Management Options, Cost Benefit and Distributional Analysis