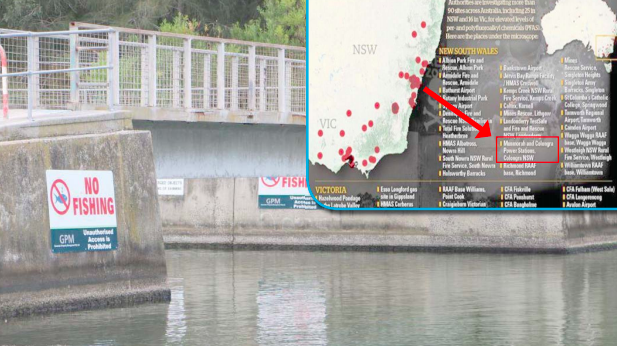 As the NSW Labor opposition makes an election promise to ban toxic PFAS fire-fighting chemicals, the NSW Environment Protection Authority (EPA) has not produced any new public information about PFAS contamination at Munmorah and Colongra power stations since October 2017.

A national Coalition Against PFAS (CAP) has been established to highlight the growing number of contaminated sites nationwide. Its President, Mr Lindsay Clout, said the EPA’s response to the detection of PFAS at Colongra and Munmorah is typical of its approach to all communities so far impacted by the chemical across the country. “What we want to do is help people understand the symantics and spin that it has taken us years to understand,’ Mr Clout said. “What they are trying to do is hide from it by saying that there is no consistent evidence that there are health impacts from this chemical, but if you take consistent out of that sentence, the whole argument collapses. “Look at the epidemiology study in the US, that included 63,000 people, that concluded PFAS resulted in testicular cancer, prostate cancer, thyroid conditions and birth defects.

“We have been fighting for two years to get acceptance that this chemical is airborn and that is another pathway for ingestion.” According to Mr Clout, the community living around the Munmorah and Colongra Power Station sites should form a community group and start demanding answers from the site owners and the EPA, about the exact levels of PFAS that have been detected in the soil, surface water and ground water. He said contaminated soil needs to be decontaminated. “Yes, there is no question that the soil needs to be cleaned up; there are stockpiles of soil covered with black plastic that they don’t know how to clean up,” he said. Mr Clout said the community around the contaminated site at Colongra-Munmorah also needs to understand that the chemical is mobile.

“While the United States has declared cleaning up PFAS contamination a ‘national priority’, and European countries move towards stating that there is no safe level of exposure, our Government has sat on its hands.”

“My word it moves, it is very, very mobile in water, it is slower in soil, but every time you have a rain event, that chemical will spread,” he said. “Communities have to stand up to the process of the suppression of information that is occurring because this is a multi-billion dollar problem and no one wants to put their hand up for it,” Mr Clout said. D Per-and-polyfluoroalkyl substances (PFAS) are used in firefighting foam and are responsible for the contamination at Williamtown, impacting at least 750 homes. There are at least 25 sites in NSW affected by PFAS contamination including the MunmorahColongra site. Generator Property Management (GPM) and Snowy Hydro advised the EPA that PFAS had been detected in the soil, surface water and groundwater at, and around, the Munmorah and Colongra Power Stations in February, 2015.

The EPA did not respond until October, 2015. An initial study was completed in May, 2016, and in December, 2016, the EPA reported to a Contaminated Site Review that information received was under assessment. In October, 2017, it called for additional testing from Snowy Hydro and GPM, but that testing did not get underway until April this year, more than three years after it was first reported. Member for Swansea, Ms Yasmin Catley, said she had received confirmation from General Property Management that they had undertaken further groundwater testing and found that all groundwater flows were inward on the site. “The fish testing is underway but has not been finished,” Ms Catley said.

“Snowy Hydro was required to pay for the fish testing but it has been coordinated by the EPA,” she said. The EPA has identified a list of species to be tested and is working with commercial fishers to catch and test fish in the Tuggerah Lakes system over a six month period. “I was concerned that this wasn’t happening quickly enough and that is why I am constantly contacting the EPA to find out where it is all up to. “I report this information at every public meeting I go to, just to make sure that the community is informed,” she said. “The fish testing has taken time but it is comprehensive and thorough,” she said.

The NSW Government continues to refuse to ban PFAS but NSW Labor has committed to banning the toxic chemicals if it wins the State Election in 2019. The commitment will see NSW join South Australia and Queensland, along with 171 other countries who have acted against PFAS. NSW Shadow Environment Minister, Ms Penny Sharpe, said comments made by Environment Minister, Ms Gabrielle Upton, in NSW Parliament, that it was up to the Federal Government to take action, were misleading.

“Labor will lead the way in banning PFAS and helping to reduce any further contamination,” Ms Sharpe said. Ms Catley said it was not good enough for Ms Upton to say it was a Federal responsibility. “There is no reason why we cannot ban PFAS when other jurisdictions have,” Ms Catley said. “We still have a number of industrial operations in our area and we need to make sure PFAS are not in use,” she said. “If you ban it then it is illegal,” she said. Wyong Regional Chronicle asked the EPA for an update on the status of the fish testing.

In a written statement it said: “Additional testing, in the form of biota sampling across Tuggerah Lakes, is currently being carried out by Snowy Hydro while Generator Property Management (GPM) have also completed further sampling at the former Munmorah and Colongra power stations. “GPM carried out soil, surface and groundwater testing across the former Munmorah and Colongra power station sites as well as performing a hydrogeological assessment to understand groundwater flow and direction at the sites. “The EPA is reviewing the results of the GPM assessment and once all sampling has been completed the results will be reviewed by the NSW PFAS Taskforce and then made available to the public. “The EPA does not have carriage of the biota sampling, this is being conducted by Snowy Hydro and their chosen contractor and they are currently carrying out testing on fish and crustaceans from Tuggerah Lakes. “Snowy Hydro and their consultant are using local commercial fishermen to catch the required number of species for their investigations including sea mullet, school prawn, yellowfin bream, dusky flathead, luderick, silver biddy, sand whiting and eastern king prawn. “The NSW PFAS taskforce completes site-specific assessments, based on data collected and other site specific considerations.

“The report on the Munmorah power station is being reviewed by the EPA,” the latest update from the NSW environmental regulator said. The newly-formed Coalition Against PFAS (CAP) will advocate for change in view of growing international alarm over the health and environmental risk from toxic PFAS chemicals. It has launched a website www.cappfas. com to update, inform and advocate for impacted communities. “In the last few months alone, PFAS chemicals have been identified in water supplies or waterways in potentially 90 other sites around Australia,” said CAP President, Mr Lindsay Clout. “While the United States has declared cleaning up PFAS contamination a “national priority”, and European countries move towards stating that there is no safe level of exposure, our Government has sat on its hands. CAP representative, Dr Peter Spafford, said communities were being left in the dark over the risks of exposure.

“The lack of clear, consistent and internationally aligned information being provided to the Australian community on the potential risks of PFAS is deeply concerning,” he said. The CAP website sets out in plain English the latest international information and news so impacted communities can understand what’s going on. A Parliamentary Inquiry into PFAS has been established to investigate how the issue has been handled nationally. CAP is encouraging those whose lives have been impacted by PFAS contamination in their community to make a submission.