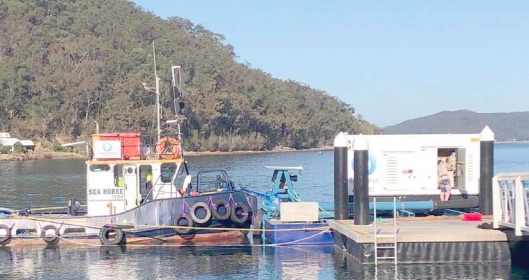 Dredging of the Ettalong Channel had started on several days last week, according to various media releases received by Peninsula News.

“The emergency dredging is only now beginning, despite being announced nine weeks ago,” Member for Gosford Ms Liesl Tesch told Peninsula News on Tuesday, July 24. Member for Terrigal Mr Adam Crouch told Peninsula News on Thursday, July 26, that dredging was set to start that day. However, despite the arrival of the dredge at Ettalong Wharf, it did not start work. Mr Crouch issued a further media release on Friday, July 27, stating that works commenced on the Friday. Staff from his office assured Peninsula News that dredging had definitely started. Dredging finally commenced on Friday, July 27, to remove up to 25,000 cubic metres of marine sand from the entrance to Ettalong Channel, Mr Crouch said in his media release. He said the dredge was larger than the one used previously and could move more sand more quickly.

“The dredge is planned to remove sand to provide a channel 30 metres wide and 2.5 metres deep to allow the ferry service to recommence,” Mr Crouch said. “It is then planned to widen the entrance opening in an effort to slow sand from moving back into the navigation channel,” he said. Parliamentary Secretary for the Central Coast, Mr Scot MacDonald, said progress would continue to be dependent on prevailing weather conditions. “Initial plans to float the dredge from Yamba to Ettalong had to be reassessed as continued bad weather presented a number of challenges,” Mr MacDonald said “The contractor had to dismantle the dredge and transport it by road to ensure it could get here as quickly as possible,” he said. Member of the Legislative Council, Mr Taylor Martin, said the works would be the third round of emergency dredging funded by the NSW Government. “The NSW Government is working with Central Coast Council to establish a long-term plan to maintain and improve boating access at the entrance to Brisbane Water,” Mr Martin said.

Residents disappointed by lack of information on dredging