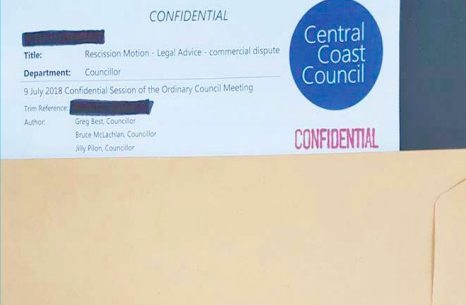 The confidential document and envelope

An unknown source, either a Central Coast Councillor or member of staff, has leaked a confidential document to the Wyong Regional Chronicle, potentially in breach of the Council’s Code of Conduct and the NSW Local Government Act.

Council’s new CEO, Mr Gary Murphy, said he would investigate the leak. Wyong Regional Chronicle cannot report on the contents of the document because we are unable to verify its accuracy. On Thursday, July 5, Wyong Regional Chronicle received, via ordinary mail, a copy of the Confidential Rescission Motion, Legal Advice, Commercial Dispute, which was placed on the agenda for the July 9 ordinary meeting by Councillors, Greg Best, Bruce McLachlan and Jilly Pilon. The plain brown envelope, stamped ‘confidential’, was postmarked July 4, and came via the Sydney West mail sorting facility.

Identifying marks on the two-page rescission motion had been redacted. Wyong Regional Chronicle does not know the identity of the person who posted the document and informed Central Coast Council that the document had been received. In a written response, Council said: “It is not possible for Council to confirm or deny the accuracy of the document … because doing so might of itself constitute a breach of confidentiality. “The CEO, Mr Gary Murphy, takes this issue very seriously and has directed that there be an immediate investigation into the release of the document … and whether or not that release constitutes a breach of the Code of Conduct and/or a breach of the Local Government Act. “Therefore It is not appropriate for Council to make further comment as to do so might prejudice that investigation.”

All 15 elected Central Coast Councillors were contacted in relation to the leak. Clrs Mehrtens, Marquart, Gale Collins, Smith, Pilon, Greenaway, MacGregor, Burke, Vincent, and Hogan did not return our calls. Deputy Mayor, Chris Holstein, said he could confirm the rescission motion had been placed in confidential for the July 9 meeting. He said there was “a range of confidential matters around that rescission that have to be considered. “I can think that the Councillors need to consider that rescission motion, but I think the horse has bolted. “I cannot make comment on a confidential item, in fact, I have a real concern that someone has sent you a confidential report from Council.

“That is utterly inappropriate,” Clr Holstein said. Clr Jeff Sundstrom said: “I won’t be commenting on the content of the motion that you are discussing and I am very disappointed that the confidentiality of items identified as confidential has been breached.” Mayor Jane Smith’s personal assistant said the Mayor was aware of the breach of confidentiality but Mayor Smith did not return our call. “I don’t like it, I think it is disgusting,” said Clr Lisa Matthews. “It didn’t come from me,” said Clr Bruce McLachlan. “I can’t comment on the actual confidential matter other than say that a proposal for it to be taken out of confidential was voted down on June 25,” Clr McLachlan said. “All I can say is I did vote to have it out in the public domain.

“I can’t discuss the confidential legal advice but I can disclose that I did vote to have it out in the open.” Clr Greg Best said, when asked to comment: “No, I can’t, it is confidential. “I cannot comment; it would be totally inappropriate for me to comment on anything whatsoever related to confidentiality,” he said. According to the NSW Government’s Councillor Handbook: “Local communities rightly expect the highest standards of conduct of those they elect to hold office in a council. “Failure to comply with these standards can undermine community confidence in individual councils and the local government sector as a whole. “Councillors may face disciplinary action by the Office of Local Government or the NSW Civil and Administrative Tribunal for serious or repeated breaches of these standards under the misconduct provisions of the Local Government Act 1993.

“Penalties include suspension from office for up to six months or disqualification from holding office in any council for up to five years. “Councillors who have been suspended on three or more occasions for misconduct, are automatically disqualified from holding office in any council for five years.” Section 7.9 of Central Coast Council’s Code of Conduct, which is based on the NSW Government’s Model Code of Conduct said: “You must maintain the integrity and security of confidential documents or information in your possession, or for which you are responsible.

The Code also states that only matters which are identified in s10A(2) of the Local Government Act 1993 may be treated as confidential. “While a specific report may be identified for consideration in confidential session, where possible, as much information as possible will be provided in a public report.”