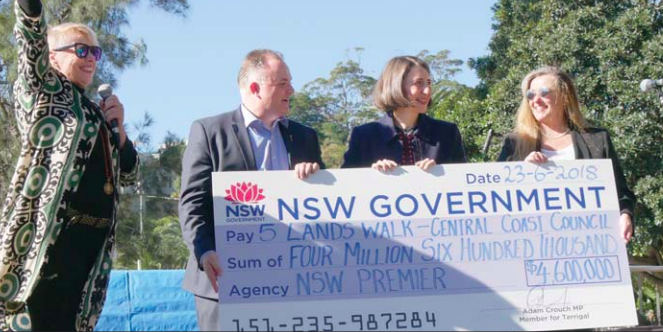 The presentation of a $4.6m cheque by NSW Premier, Gladys Berejiklian, at the 5 lands walk on June 23, was at odds with a recent commitment from Central Coast Councillors to conduct further community consultation before commencing Stage 2 of a permanent Winney Bay Cliff Top Walk at Copacabana.

As a direct response to community concerns, Council passed a resolution to re-exhibit the second stage of a master plan to build a permanent 5 lands walk, as well as investigating potential improvements to Del Monte Pl, in terms of parking and vehicle and pedestrian traffic, at its May 28 meeting. It will not stop or undo the first stage of recent, but incomplete works at Winney Bay, which included concrete stairs and a service road through the Winney Bay Reserve area that the Save Winney Bay community group wants to see demolished and the bushland restored. Save Winney Bay has been campaigning against the Stage 1 works, which stemmed from a 2011 masterplan to create a permanent 5 lands walk.

One of the Winney Bay warriors, Ms Elaine OdgersNorling, told ABC Radio Central Coast after the cheque presentation, that Save Winney Bay had renewed concerns about Stage 2, now that the project had secured new state government funding. “Stage 1 saw up to nine metres of bushland flattened to put in the steps, now Stage 2, up near the existing Winney Bay lookout, will be up to 15 metres being cleared to introduce the road and the all-access pathway, that is a bit over the top,” Ms Norling told the ABC. She said she urged Council to address community concern about Stage 2 of the walk between Copacabana and Avoca.

“We’re in a bit of a Catch 22 as … our Mayor is also the patron of the 5 lands walk,” she said. “Now she did not declare that at the last consultation meeting we had in Copa with over 100 people, and that’s worrying. “Wearing two hats is always a problem.” Following the recent 5 lands walk, Ms Odgers Norling said: “The opening ceremony with Yantra and the portal at MacMasters Beach, along with the journey of the Aboriginal message stick, were highlights for me. “Sadly, the $4.6m cheque might have been, had it not been given to disfigure our land. “The ‘people and place’ mantra is a hollow statement when place is being reconfigured and destroyed.

“My plea is that the money be used for an environmentally sensitive track to continue from the top of the new cement steps to the existing Winney Bay Lookout, and an all-access pathway be introduced to the Captain Cook Lookout, with the balance of the money going to rehabilitating the bushland of Winney Bay and the headland with plants of the area.

“I hope a long-term legacy of this grant is the establishment of a seed bank and nursery so that our land, the 5 lands, are sustained and regenerated with indigenous vegetation for many decades. “Any new lookout, or bridge, or further clearing, of the Winney Bay area would be a crime against nature and the history of this ancient place.” Ms Odgers Norling said she had written to Mr Con Ryan, President of 5 lands walk, Mayor Jane Smith and to Premier Berejiklian.

“Another cliff top set of steps is excessive, when so many other projects, like wheelchair access to Captain Cook Lookout, and vital bush regeneration, go unfunded,” she said to the Premier. Premier Gladys Berejiklian and the Member for Terrigal, Mr Adam Crouch, chose the occasion of the 2018 5 lands walk to announce that $4.6m had been awarded to Central Coast Council for construction of the Winney Bay Cliff Top Walk. Winney Bay is a highlight of the 5 lands walk, linking Copacabana to Avoca Beach, Ms Berejiklian declared. Mr Crouch said the funding would build a new, safer path, as well as a viewing platform, which will enable the picturesque landscape to be better enjoyed by locals and visitors.

“This project will help improve access to the 5 lands walk track so that residents and visitors can enjoy the local environment all year round,” Mr Crouch said. “This project is both environmentally and culturally sensitive, and is supported by the Darkinjung Land Council, given the location’s significance as a part of the Yango dreaming creation story,” he said. “I acknowledge the support and advocacy of 5 lands walk President, Mr Con Ryan, and the Copacabana 5 Lands Community Group for their unwavering vision to deliver this project.” Premier Berejiklian said: “Events like the 5 lands walk attract participants, not just locally, but from other regions, and last year more than 1.4 million tourists visited the Central Coast, spending $796m,” Ms Berejiklian said.

“The Central Coast isn’t just a great place to live and work, but is a wonderful place to visit, and we want to make sure tourists and locals can enjoy beautiful spots like Winney Bay.” Another of the Save Winney Bay Warriors, Ms Joy Cooper, told a meeting of Central Coast Council on May 28, that the Stage 1 concrete stairs and access road had been built on Crown Land, had not been the subject of a development application, and she had not been able to get confirmation from the State Government that there had been Ministerial or delegated approval.

Mayor Jane Smith said the project would deliver significant benefits for Copacabana and the Central Coast more broadly. “This project will have far-reaching benefits and Council will make sure everyone is well informed by re-exhibiting the second stage of the project,” said Mayor Smith. “This event attracts thousands of people each year, and these upgrades will ensure our spectacular coastline can be admired by both locals and visitors to our area, all year-round,” Mayor Smith said. She said Council was on track to deliver the first stage of the upgrade in June, 2018, however, according to Save Winnie Bay, as at July 4, the project is still incomplete.

Ms Cooper refuted that the project was on time and argued that the stairs were 720 metres and the service road a further 306 metres, made of 30-60cm road base. Ms Cooper and Ms Heather Graham, who also addressed Council, said that they did not believe the first stage was in keeping with the original spirit of the 5 lands walk, or that it would have far-reaching benefits. “The 5 lands Coastal Masterplan …says the wind, sand, stone, water and native vegetation are all part of the tactile experience of the 5 lands coastal walk, one of the pleasures of walking on a coastal environment is the feeling of the uneven surface of the ground beneath your feet,” Ms Cooper said. “It doesn’t mention a concrete stairway,” she said.

According to Ms Cooper, the land clearing for the Stage 1 access road and staircase has caused environmental damage and has not been carried out in a manner that has even been mindful of the surrounding littoral rainforest Ecological Endangered Community, the protection of trees and sensitivity to mapped Aboriginal heritage items. “Figure 10 in the Aboriginal heritage assessment clearly shows archaeological sensitivity in the southern part of the study area,” she said. Ms Graham said: “The current works deviate markedly from masterplan recommendations.” She said the works had, in fact, been environmentally destructive, involving the removal of more than 60 trees, including endangered species.

“Locals are concerned about the stability of the cliff face, substantiated by council signage at the ends of the cliff,” she said, commenting on the absence of a geotechnical report. “Lastly the architecture for the whale watching platform, wedding platform and market stalls [the now funded Stage 2] is unsuitable. “Stop work immediately and have consultation with all community stakeholders, remediate the environmental damage, remove the road base and remove the concrete,” she said. Mr Adam Richards addressed the May 28 Council meeting on behalf of the project, as a representative of the 5 lands walk.

“We have an exciting and positive project that is creating division and tearing people up, and the division and misinformation is being played out in local media,” Mr Richards said. “It is not the evil pathway that it is being described. “It has a huge positive effect on the community looking years ahead,” he said. “Winney Bay was a farm, and the land is covered in weed.” “I am asking Council to please expedite a decision on how we are going to move forward on this,” he said.