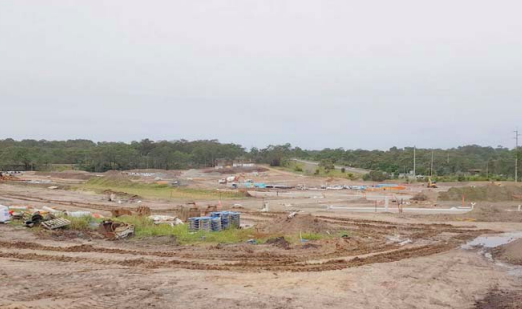 Construction has started on a $6 million, 140 lot subdivision at 111 Sparks Rd, Woongarrah, to be built over five stages.

It is the latest increase to housing stock in the area earmarked for the Warnervale Town Centre, and existing residents want to know when, if ever, they will see the train station, shopping centre and other long-promised facilities to support the housing explosion. Long-term Warnervale resident, and former Chairman of the Watanobbi-Warnervale Precinct Committee, Mr Jack Harris, said the latest housing development will create further congestion on an already struggling road network, and will result in more young families moving to the area with the expectation of having access to services such as nearby shops.

“There is nothing wrong with Lake Haven Shopping Centre, the problem is, it was built 32 years ago to cater for the people at that time,” Mr Harris said. “Even though Woolworths is building at Wadalba, they still own the land in Woongarah that was meant to be the for Warnervale Town Centre shopping centre, but they are not prepared to sell it in case someone else buys it and goes into competition with them,” he said. Mr Harris said he had written to the new owners of Westfi eld Shopping Centres, and they had responded that if the land became available, they might consider acquiring it.

“Let Woolworths sell it to Scentre Group on the clear understanding that they can become the tenant rather than the developer,” he said. The most recent 140- lot subdivision is on land originally owned by Landcom, that is now understood to be owned by Chinese developers. “The big thing that makes me scratch my head here is that at one time, Woolworths, Landcom and Wyong Council spent $3m to build the road to the planned shopping centre, and $23m to extend Sparks Rd. “Now we are going to have over 1,200 new residents, but no shopping centre, no railway station and it is time to find out why. “Now there is nothing happening other than the ambulance station is being built, a private hospital and a service station, but these are not State Government matters, and I think there is something wrong here.

“I feel that there is going to be an implosion, the sheer weight of the people coming in is going to force the authorities to do something, but that is when you start making mistakes. “They are not stopping the residential development, but they are not providing any infrastructure. “We are eight shopping centres under-serviced, and that is before you look at the number of people moving in. “The police station at Wyong was built 11 years ago and it is already overloaded now by the sheer weight of people coming in. “The population growth affects the hospital, roads, police and emergency services. “The main problem I see here is the lack of development in the area where the shopping centre was supposed to go. “This is a people problem, not a political program, and it is time to look at the overall picture,” Mr Harris said.