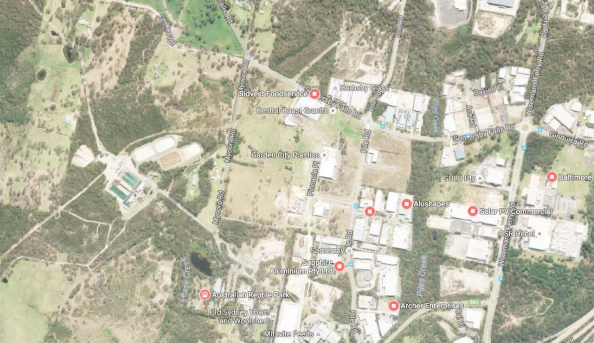 Aerial view of the Somersby IndustrialPark

Central Coast Council has resolved to shelve the preparation of plans to rezone a number of sites within the Somersby Industrial Park and revisit expansion of this or alternate industrial areas as part of the proposed Southern Growth Corridor Strategy in the Central Coast Regional Plan.

A total of 14 individual sites had been part of a planning proposal initiated under the former Gosford Council to rezone land on Acacia Rd, Somersby Falls Rd, Wisemans Ferry Rd and Debenham Rd (North), Somersby, from RU1 Primary Production to IN1 General Industrial, under the Gosford Local Environmental Plan 2014. “After Council undertook a detailed review of these lands, it was found that any potential rezoning will only result in a marginal increase in employment land supply, and it is premature to rezone additional lands for employment purposes ahead of the Southern Growth Corridor Strategy, and the NSW Department of Planning and Environment’s Central Coast Biodiversity Project,” Central Coast Mayor, Jane Smith, said. “Accordingly, Council has discontinued investigations into this rezoning.”

Mayor Smith said that whilst these proposed plans were appropriate at the time, given the new spotlight on Gosford as the commercial capital of the Central Coast, it was important to pause and review how to best identify and develop industrial lands as part of the bigger picture for the development and growth of the Central Coast. “We know our region is growing quickly and that our proximity to Sydney and Newcastle makes us an ideal location for appropriate activation of industrial areas,” Mayor Smith said. “Council will be consulting with the community on how and where we develop industrial areas as part of the Southern Growth Corridor Strategy, and how this can position the Central Coast to take advantage of opportunities for economic growth and job creation for our community,” she said.

Towards that end, the second direction in the Regional Plan, after revitalising Gosford as the region’s capital, was to focus economic development in the southern growth corridor. According to the plan, “The Central Coast Highway defines the Southern Growth Corridor, linking Somersby in the west and Erina in the east. “It provides services to communities in the southern half of the region. “The success of the corridor depends on protecting its natural attributes, revitalising and facilitating better transport access with Gosford City Centre, and achieving more diverse economic growth opportunities in Somersby Business Park and the Erina commercial precinct.

“There are opportunities to expand the capacity of the industry, manufacturing and logistics hub at Somersby, and capitalise on its proximity to productive rural and resource lands in the west of the region,” the Regional Plan said. Coast Community News has asked the NSW Department of Planning for a status report on the seven “actions” included in the Regional Plan that relate to the Southern Growth Corridor. The first of those actions was to “undertake precinct planning for Somersby Business Park, Mt Penang and Kariong, to expand employment in the regional gateway and improve services, synergies between activities and access to the M1 Pacific Motorway and Central Coast Highway”. Attention will then be turned to West Gosford, where the NSW Government plans to: “Capitalise on improved access from the $170m upgrade of the Central Coast Highway, Brisbane Water Dve and Manns Rd intersection to increase employment diversity and integrate land uses at West Gosford. Renewal and revitalisation of Gosford CBD, East Gosford and Erina follow, along with protecting environmental values along the Southern Growth Corridor and planning for increased road, public transport and pedestrian and bike connections.

The Somersby Business Park Plan of Management was introduced in 2005 by the NSW Premier’s Department and Gosford Council because: “over time, items of ecological and indigenous heritage value had been identified within the Park, including threatened flora and fauna species, and Aboriginal sites and artefacts”. According to the Plan of Management, those discoveries caused “a high level of uncertainty as to the intensity and location of development that could take place in the area”. A task force, chaired by the NSW Premier’s Department, was set up to oversee the preparation of the Plan of Management.

The key management issues relating to the Somersby Industrial Park that the Plan of Management was intended to address were the clearing of native vegetation and habitat removal, maintenance and significant habitat linkages and wildlife corridors, changes to the natural water flow and water quality, preservation and protection of heritage sites and physical constraints to development. All future development has to conform to Performance Objectives and Management Actions set out in the Plan of Management that supported statements of significance around ecology and environment, Aboriginal heritage and economic considerations. The Industrial Park was divided into three management zones based on sites identified as having Aboriginal Heritage, core habitat, habitat links or areas with physical constraints to development.

Each zone has specific development restrictions in consideration for their future management, to streamline development applications and make landowners aware of any restrictions on future development, well in advance. Although it did not provide an update on each of the seven strategies, in a written statement, the NSW Department of Planning and Environment said it was continuing to work closely with Central Coast Council to implement the Central Coast Regional Plan 2036, including the Southern Growth Corridor. “The Department has been working with Council to finalise the draft Southern Growth Corridor Strategy for exhibition,” the written response said. “Council is understood to be reviewing its Southern Growth Corridor planning strategy work to ensure it aligns with the recently announced Gosford City Centre revitalisation package and aims to exhibit its draft strategy soon. “The Southern Growth Corridor Strategy will identify opportunities for other key centres, including Erina and the Somersby area, which includes the Somersby Business Park.

“The Department will work with Council to ensure the proposed growth of the Somersby interchange reflects its significant employment and regional gateway roles. “This will complement work already underway from a multi-agency group to identify opportunities to unlock potential development in the existing Somersby area to expand its employment role. “The Coordinator General for the Central Coast, Ms Lee Shearer, and the Department’s Central Coast Coordination unit, will continue to work with the Central Coast Delivery Coordination and Monitoring Committee (DCMC) – the body comprised of various agency and stakeholder representatives, including Council – to ensure the vision outlined in the Regional Plan is delivered. “The Department is currently reviewing the work undertaken to date to implement the Regional Plan to identify what work is needed to support its next phase of implementation. “This will lead to the release of an updated implementation plan and annual monitoring report, later this year. “The last report was released in November 2017.

“The Department is always happy to sit down with Council and work through specific issues to ensure all planning proposals are progressing in a timely fashion.” Meanwhile, land will be acquired at Somersby Industrial Park for road widening and an easement drain, following a resolution of Central Coast Council. The land acquisition is part of a four-year, $24m project to upgrade infrastructure at the industrial estate. The acquisition and construction budget for the part of the project that relates to the land acquisition resolution was $5.2m in 2017, and a further $6.8m in 2018- 19. Councillors resolved to acquire parts of lots on Pile Rd, Wisemans Ferry Rd, Debenham Rd and Gindurra Rd, Somersby. Council staff will endeavour to acquire the land by agreement with the landowners. If negotiations with the property owners cannot be satisfactorily resolved, Council will compulsorily acquire the land and easement, pending permission to do so from the Minister for Local Government.

According to a staff report tabled at the June 12 Council meeting, Somersby Industrial Park was created in the 1970s. A Service Contribution Agreement was set in place between NSW Planning and Environment and the then Gosford Council. The Service Contribution Agreement identified future infrastructure requirements. The land acquired will be used as part of the Somersby Industrial Park Infrastructure Upgrades Project, a four-year program to construct the required infrastructure with all works and expenditure to be completed by June 30, 2019. It will be used to facilitate the road infrastructure requirements for road widening, new roads and drainage. The owners of the affected land have been consulted by the Road Assets, Planning and Design Unit within Central Coast Council. “Responses have been received from the owners indicating agreement to the works and acquisition, subject to agreement as to compensation,” the report to Councillors said.