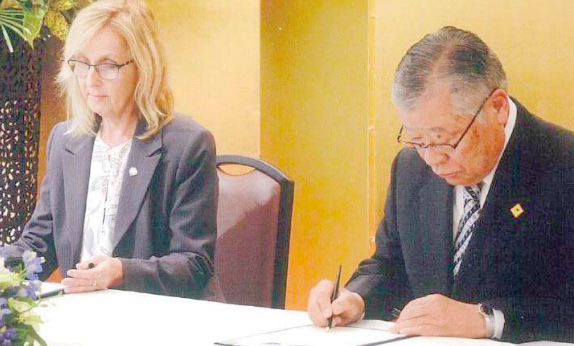 Central Coast Council has resigned the sister city agreement with Edogawa City Council, which will see a stronger cultural exchange and continued benefits for the Coast community.

“The sister city relationship with Edogawa City during the last 30 years has delivered many benefits for the Central Coast, including the establishment of the Edogawa Commemorative Gardens, Mayoral and dignitary visits, staff exchange, and the youth exchange program,” said Mayor Smith.

“The youth exchange program has provided an invaluable opportunity for local students and their families to participate in a variety of academic, social, cultural and sporting activities with students from Edogawa City. “Earlier this year, there was also a generous donation from the Urasenke Foundation to build a traditional Japanese Tea House as part of the Edogawa Gardens at the Gosford Regional Gallery. “For many years, there have been strong connections between our communities, and it is pleasing that this will continue with our Central Coast Council.

“I look forward to the continued friendship and cultural understanding,” Mayor Smith said. Sister city relationships are valuable ways to share knowledge and culture and exchange ideas. As part of the sister city agreement, both Councils visit each other periodically. The recent Mayoral and dignitary visit to Edogawa and Japan was endorsed by Council in February.