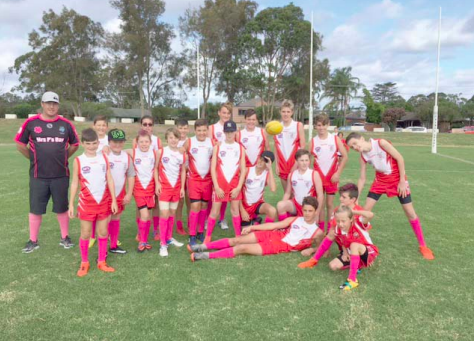 “The club is going through a period of growth and a core area of focus is establishing a family-friendly environment that enables kids of all skills to be part of a team,” said president Mr Jason Fulwood. “With so many members in our local community affected by breast cancer, the club was keen to do something this year to make a difference. “The club sold raffle tickets, arranged a cake stall and all players wore pink socks to raise funds for such a worthy cause.

“We are proud of the work that we have done with this initiative and we will continue to focus on making the club a family-friendly, socially-aware environment. “We plan on making next Mother’s Day bigger and pinker,” Mr Fulwood said. “Even though the season has started, the Swans welcome new players to the club. “Aussie Rules is a game for everyone,” he added. The Peninsula Swans will also host the AFL Hunter Coast’s 2018 Challenge Cup on June 10 at Rogers Park. The Challenge Cup will pit seven junior AFL teams against one another, starting with the Under 12’s girls at 9am and conclude with the Under 17’s boys at 5:10pm.

Van Dam makes it to 300 games for the Panthers