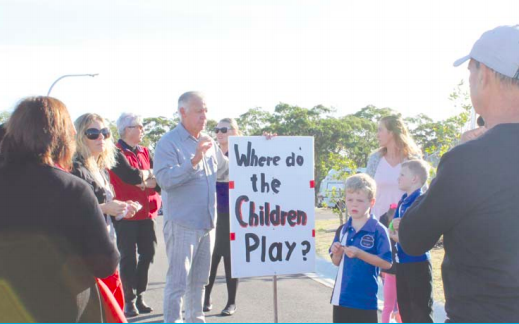 Mr Bill Symington, holding the plackard, speaking with Gwandalan residents about the park

A park-playground promised to a Gwandalan community, and then deleted from a subdivision plan, may be reinstated, following a motion presented to Central Coast Council by Mayor Jane Smith, and adopted unanimously on June 25.

Mayor Smith, who said she had met with the community, which consisted of many young families, moved that Council request the Chief Executive Officer to investigate options for the provision of a local playground in the vicinity of a recent subdivision near Kanangra Dve, Gwandalan. When new CEO, Mr Gary Murphy, starts work on July 1, he will also be reporting back to Council on the balance of Section 94 contribution payments made by the developer to Council, collected from the subdivision.

Mayor Smith’s motion also requested a report on the status of works on Tunkawallin Park and opportunities to reallocate funding to the provision of a local park. The report, due back to Council by the last meeting in August, will also look at options to amend the Section 94 plan to provide opportunities for funding to be allocated to open space. A consultation meeting will be held with local residents to discuss options, and Council will review its policies regarding the provision of playgrounds, in particular recognising the benefits of providing local playgrounds.

Mr Bill Symington, Secretary of Gwandalan Summerland Point Community Improvement Group, addressed the meeting, and asked Councillors to “investigate how we can re-establish a playground in a subdivision that was once approved and has, unfortunately, following certain actions, become deleted. “Our community did not just decide one day that a playground park would be a good addition to a subdivision. “The situation came about because the developer had, in 2015, submitted a proposed modification, which included, among other things, the deletion of the park,” he said. “How it happened is a serious matter, but I don’t want it to interfere with the goal of having it reinstated.

“In this whole episode, the developer has been the winner,” he said. Clr Doug Vincent asked Mr Symington to nominate an alternative location for the park. “The same developer owns the land on both sides of the boundary, to the south of the subdivision and to the north,” Mr Symington said. “He got 0.4 hectares, he can give up 0.4 hectares that is adjacent to that land.” There were no speakers against the motion and it was passed unopposed.