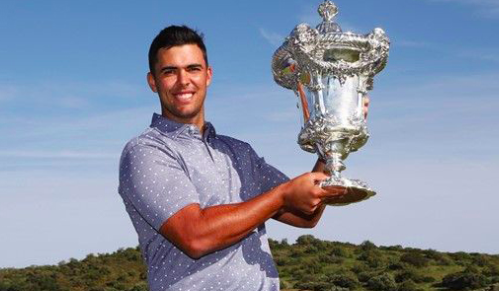 Dimitrios Papadatos, a former Mackillop Catholic College student, has secured his maiden European Challenge Tour golf title at the 56th Open de Portugal. Papadatos secured the title by carding a three under par in the final round of the competition.

The 26-year-old, and three-time winner on the PGA Tour of Australasia, locked in a 25-foot birdie putt at the 10th to extend his advantage over the pack. Papadatos took the windy conditions in his stride, setting the clubhouse target at seven under par. With home favourite, Lima, unable to birdie at the 18th, Papadatos was crowned champion, and he was delighted to have claimed his first victory in Europe. Following the win, Papadatos fronted the media. He spoke about the conditions, the play during the Open de Portugal and his next move. “It feels pretty good and a big relief, especially after the last couple of days,” Papadatos said. “It’s been very windy and difficult, you had to grind out results in such a bunched field when it’s very hard to break away and get in front, but I was fortunate enough to do that in the end. “I played the course well today.

“I was very solid finishing long par putts, and I didn’t threaten to make many birdies, as I was hitting it poorly today, but I hung in there and my short game was good and I took a couple of opportunities when I got them. Papadatos has been a consistent talent on the Australasian golf circuit but has struggled to break into the European scene. He hopes this victory will help change that. “I’ve had a couple of wins back in Aus and I’ve never won in Europe, so it’s maybe not the biggest, but it’s definitely the most important, as it’s going to get me going over here. “I’ve been trying for the last two or three years to get myself going in Europe and onto the main tour, so this is a big step forward and it’s going to help me out a lot,” Papadatos said. The win moves Papadatos up to 9th place on the Road to Ras Al Khaimah Rankings, with 32,000 points.