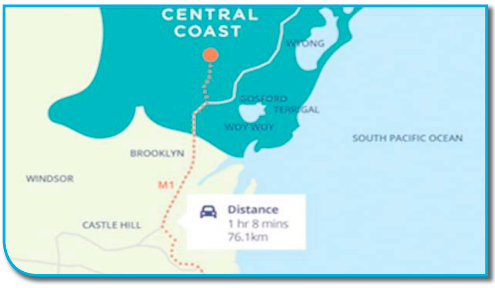 The map, omitting The Entrance, was updated by Tourism Central Coast

Tourism Central Coast, the new organisation charged with promoting tourism in the Local Government Area, initially left The Entrance, one of the region’s most iconic tourist destinations, off the map on its new website.

The new-look visitcentralcoast.com.au was relaunched during May, but Member for The Entrance, Mr David Mehan, said he had to ask Tourism Central Coast to, literally, put The Entrance on the map. “The Entrance has always been a popular holiday destination for the Central Coast and has continued to grow with new tourist accommodation, development of residential areas and growing recreational facilities,” Mr Mehan said. “The Entrance is well known for its beaches, town centre, the lake, Majestic Cinemas and the pelican feeding platform but, sadly, these local icons have been forgotten,” he said.

“I know The Entrance is used to being left off the map but I didn’t think Central Coast Council’s new Tourism Operator would take it so literally. “As usual, anything North of Terrigal is forgotten. “This is just completely outrageous. “I ask that this map be updated to reflect the true Central Coast and to ensure that The Entrance is put on the map.”

Shortly after Mr Mehan’s statement on May 17, the map was updated to include The Entrance.

Source: Media release, May 17 David Mehan, Member for The Entrance