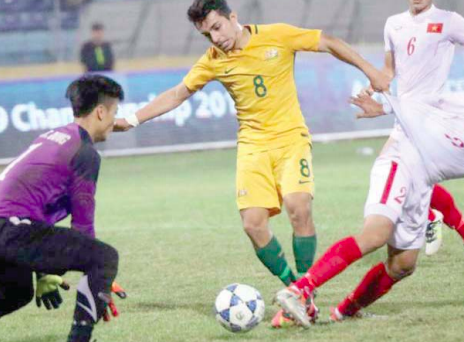 Mario Shabow as a Young Socceroo

The Central Coast Mariners have announced the signing of 20-year old attacker, Mario Shabow, on a two year deal.

The Australian Youth International arrives from the Newcastle Jets, and can be deployed as a creator in the number 10 role or as a wide attacking threat. Shabow was born in Baghdad, and moved to Australia with his family at six-years-of age. Still only early in his Hyundai A-League career, Shabow broke onto the Australian football scene with the Western Sydney Wanderers. After impressing with the Wanderers’ Academy set up, Shabow earned his maiden professional contract in 2016, when he was called into the club’s Hyundai A-League outfit. He went on to make two appearances in the Hyundai A-League and one in the AFC Asian Champions’ League. Shabow then managed seven Hyundai A-League appearances with the Jets last season and is looking forward to a fresh start on the Central Coast. “I’m really excited to get started at the Mariners,” Shabow said. “It was a tough season for me in regards to game time, so I am so motivated to get out there and show everyone what I’m capable of. “This is a new challenge for me and that’s what I’m looking forward to. “I want to work hard at training, be a consistent starting player and do everything I can to take the team forward. “I’ve heard so many good things about the club and the Central Coast, so I can’t wait to get there and meet all the boys. “I’m ambitious, I’m very hard working, and most importantly, I’m a winner,” Shabow said. Central Coast Mariners’ Head Coach, Mr Mike Mulvey, is looking forward to working with Mario at the Mariners. “Mario is an impressive young man,” Mulvey said. “He is very determined to be a success as a football player, and that desire is exactly what is required, because we already know he has the talent. “I look forward to seeing how he makes the most of this opportunity at the Mariners,” Mulvey said. Shabow, Simon, Clisby, Aspropotamitis and Gameiro will report to the Central Coast Mariners Centre of Excellence in the coming weeks to link up with their new teammates and commence the Hyundai A-League 2018/19 preseason. To date, Mulvey has assembled a squad consisting of Adam Pearce and Ben Kennedy as goalkeepers, Jonathan Aspropotamitis, Antony Golec, Jake McGing, Kye Rowles, Jack Clisby as defenders. Midfielders signed or retained to date are Adam Berry, Tom Hiariej, Jacob Melling, Danny De Silva and Mario Shabow. Attackers in Mulvey’s lineup so far are Andrew Hoole, Connor Pain, Corey Gameiro, and Matt Simon.

Mariners disappointed not to get a point from Roar match