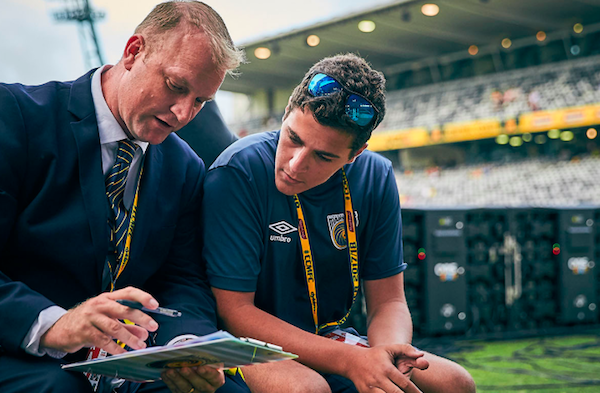 Starting as a digital competition (PlayStation 4 and Xbox One), between June 18 and July 14, the finalists will be invited to a play-off in Sydney, where the winner will be crowned the undisputed Mariners’ Digital Football League Champion at a live event on July 14. The winners on each console will claim a cash prize.

The inaugural ‘CCM Digital Football League’ is the first e-sports tournament to be run by a Hyundai A-League club, with a plan to grow and connect with millions of e-sports athletes across the globe. Central Coast Mariners’ Owner, Mr Mike Charlesworth, has been working closely with DSG to build a tournament that will connect millions of e-sports players under the Mariners’ banner and is excited by what the future holds in the e-sports landscape. “Last season, the E-League was a pivotal success,” Mr Charlesworth said.

“It engaged millions of spectators across the globe and we need to capitalise on this and see what else we can do. “In partnership with DSG, we’re accelerating the growth of competitive gaming through the CCM Digital Football League, producing more competition, attracting more competitors and offering a cash incentive. “This is the first of hopefully many e-sports competitions we can run at the Central Coast Mariners and we’re passionate to lead the way in this space,” Mr Charlesworth said.

Digital Sports Group is an Australian owned e-sports organisation with a mantra to create e-sports for all. Their aim is to increase the talent pool of e-sports by providing clear pathways from the couch to pro, whilst providing an opportunity for people to play competitively and make money from their hobby. DSG’s Managing Director and Founder, Mr Jon Rowe, spoke about the growth in e-sports and is committed to helping the Central Coast Mariners become an industry leader.

“The Mariners came to us with a very clear direction to become one of Australia’s leading e-sports clubs,” Rowe said. “We are excited to partner with them to manage the crossover from traditional sports into e-sports. “Our collective goal is to make e-sports accessible to people from all walks of life. “E-sports is a United States based $900m industry, growing at a rate of 38 per cent year-on-year. “E-Football is the next great frontier of e-sports, and Digital Football League will be at the forefront,” Mr Rowe said.