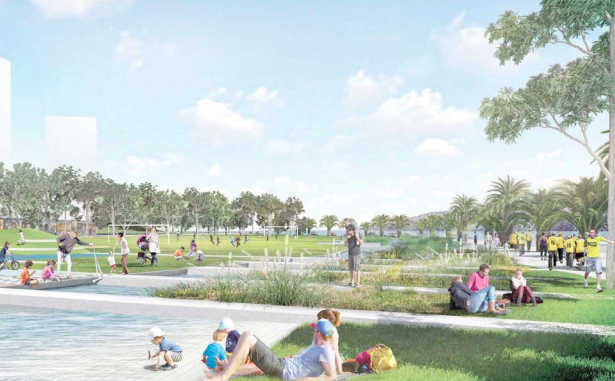 The Government Architect’s (GA) third and final place-based report creates a vision for Gosford’s southern precinct, but it does not mention the waterfront.

“Parklands in the city south have the potential to bring the locals, the landscape and the water together,” the report said, and clarifi ed that it looked at the Leagues Club Field, Gosford Stadium, the Australian Tax Offi ce (ATO) building, the Finance building, and Baker St. “Once the Civic Centre is revitalised, the hospital is completed and better connected to the city, Mann St is improved, and the investment in jobs and growth in the south is leveraged, collectively government and key stakeholders will be in a better position to examine what the Waterfront needs to be, to best support the City and the region. “Previous plans and visions have failed to deliver a publicly desirable, economically viable and implementable outcome for the waterfront. “GA NSW recommends undertaking a specifically designed process that involves genuine and broad stakeholder and community engagement to develop a shared understanding and approach to its future.

“There should be extensive analysis of potential uses, physical challenges, strategic objectives, movement requirements, and public domain, cultural and development opportunities. “Planning controls, governance, ownership and management should all be examined as part of the process. “Public access and public benefit need to be paramount, as the natural and cultural qualities of the environment need to be respected and enhanced. “Equally, opportunities for investment and the creation or improvement of regional attractors should be explored. “Ultimately, the vision, viability and feasibility of ideas and proposals should be evaluated against a clear vision, supported by shared values and principles,” the report said. Meanwhile, “The city south should better connect Gosford’s city centre to the water’s edge,” it said of the area described as a key arrival point for visitors to the Central Coast and communities who live around Brisbane Water.

Rather than focus on the waterfront, the Government Architect took the view that the “focus in the short term should be on where investment and change is occurring in the city and where building momentum for improvements can be supported and implemented efficiently and effectively. “While there has been a focus on the waterfront in previous documents, and clearly evident as a concern in ongoing community consultation, there are complex and inter-related issues and opportunities that need to be explored in greater detail than possible in the scope of work defined for this UDIF. “As such, the work in this report focusses on the important area of the city to the north of the Central Coast Hwy and how this part of the city connects to the civic centre, and over time, will function as a physical, social and economic connection to the waterfront.”

The report lists the regional attractors located in the south as the Stadium, Gosford Olympic Swimming Pool, Central Coast Leagues Club, Conservatorium of Music, Sailing Club and boat jetty. “The proposed Regional Performing Arts Centre will add to this collection of regional destinations. “The park offers a huge opportunity to accommodate a range of uses from active sport, to children’s play, to walking and passive recreation. “Recent commercial developments of the ATO offi ces and further government offi ces on Mann St have brought a large daytime population to the area.

“This diverse population needs to be supported by new public domain, allowing the city to function well in event mode as well as day to day. “The Darkinjung are the original indigenous inhabitants of this land. “They have a deep connection to this place which must be respected, engaged with as a living culture and brought to the surface in any future development of the southern city.” A more direct cycle and walking trail to Point Clare should be considered as a priority, according to the report. According to the GA’s vision, Baker St becomes a vibrant pedestrian prioritised boulevard and catalyst for the reinvention of the city’s south. “The extension and activation of Baker St will help start the reinvention of the south” and there is potential to close the southern end of Vaughan Ave.

Baker St is the logical and level access to the Leagues Club Field and waterfront beyond from the station and civic heart. “It is the only gently graded street that provides active transport linkages and ties the city core to the waterfront. “Together with Georgina Tce, it has been emphasised as the active transport focus and a continuation of the Mann St ‘civic spine’. “No further driveways are to be located on Baker St, service entries are to be located on Vaughan Ave, with access from Mann St, and no through traffic to the highway. “An active park and pedestrian prioritised boulevard connecting the city with the water will become a focus. “There is an important opportunity for League’s Club Field to accommodate a range of uses, including a regional playground, and active and passive recreation.

“The park is currently not well activated, and does not cater for a large range of users. “Consider temporary activation strategies for the park in the short term, such as food trucks and events. “Define and frame the edges at the park and attract people to use the park with active street frontages. “Establish planting to reduce the impact of the highway. “Rename the park to define its importance as a public space for the city of Gosford. “The park is separated from the water, and the creek which used to run through the park is now piped underground. “Draw the experience of water into the city by reimagining the piped creek which runs through the park. “Establish water play and cooling recreation activities in the park, related to a new regional playground. “Engage with the Indigenous community around the uncovering of the creek.

“Maintain solar access to public spaces, including the park and the boulevard. “More specifically, ensure solar access for four hours between 9:00am and 3:00pm at the winter solstice to 70 per cent of the Leagues Club Field. “Currently Dane Dve, between the stadium and the Leagues Club Field, is temporarily closed for major events to create spill-over space and ensure safety for the crowds exiting the stadium. “Connections are poor at other times.” The GA recommends formalised road infrastructure to allow shared use of Dane Dve, to east of the stadium, and the pedestrianisation of the street during events at the stadium or the park. “Improve pedestrian crossings on Dane Dve, Georgiana Tce and Baker St.

“The Central Coast Leagues Club’s prime waterfront location and proximity to the stadium offers a unique opportunity to integrate further community uses. “Ensure future Leagues club development provides an active frontage to the park,” the GA report said. “Carparking entry should ideally be off Dane Dve, not Georgiana Tce or the improved Baker St. The 32 Mann St site forms part of the future Baker St extension, and is a key link in reconnecting the city with the waterfront and park, the report said. Dane Drive alongside the Stadium is identified as another important connection between Grahame Park and Donnison St.

“The conversion of this road to a shared way should be investigated, helping to slow traffic, improve safety, connectivity and amenity at all times. “As part of the proposed Access and Movement Strategy and the current traffic study, consider options for improvements to the Dane Dr intersection with the Central Coast Hwy, including a pedestrian and cycle crossing. “Objectives of the review would include a Point Clare cycleway and improved access to Grahame Park under the Brian McGowan Bridge. “Shuttle bus services from Adcock Park in the west, and Hylton Moore Oval in the east, are also considered, to enable parking outside the city centre when the stadium or city park are being used as major event venues.