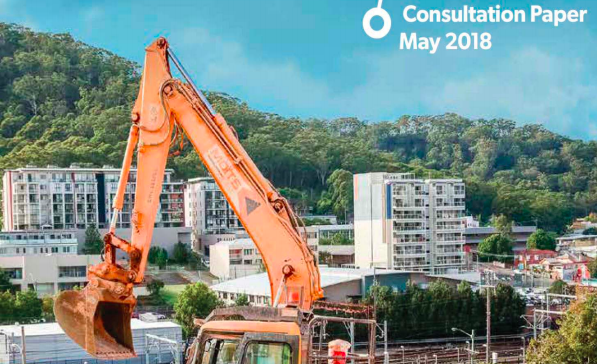 A pivotal consultation paper has been released detailing the NSW Government’s revitalisation program for Gosford, and the deadline for community submissions is June 28.

The Government Architect has created a vision for the future Gosford and now the NSW Government is outlining how it intends to deliver that vision. The announcement of $42m to upgrade water and sewer infrastructure, and $10m for streetscape improvements and a city playground, were the sweeteners. The consultation paper details what the NSW Government intends to do with the planning controls that will determine the future of the CBD. Who is in control?

The NSW Government appointed Coordinator General, Ms Lee Shearer, and a revitalised Central Coast Regional Development Corporation (CCRDC), have been placed centre stage to deliver the new-look Gosford CBD, with reduced powers for Central Coast Council in the short-to-medium term. “To achieve real change and realise the potential of Gosford City Centre, the initiatives …are proposed to be cooperatively implemented by the NSW Government, Central Coast Council, the private sector and the community.

“The Coordinator General for the Central Coast will guide and oversee the delivery of the initiatives, in part through the Central Coast Regional Development Corporation (CCRDC), and the Delivery, Coordination and Monitoring Committee that has been established to oversee implementation of the Central Coast Regional Plan 2036.” The CCRDC will drive delivery of the revitalisation. Its priorities will be: working with all levels of government and industry to “unlock underutilised government-owned lands; repurposing government assets; capturing, valuing and facilitating transit orientated development that contributes to Gosford’s role as a regional city; leading the promotion and branding of Gosford; delivering public domain and place-based projects with Council; and, attracting private investment. “Central Coast Council will partner with the NSW Government to represent the community as the city centre is revitalised.

“Gosford Business Improvement District (GBID) will represent the business community and drive promotion. Other stakeholders include NSW Health, NSW Education, TAFE NSW and universities. A Place Manager will be established by CCRDC to foster partnerships, with oversight of activity that impacts the CBD. What are the planning rules? NSW Planning intends to use several legal mechanisms to achieve its program. It will amend State Environmental Planning Policy (State and Regional Development) 2011, to enable developments over $10m to be assessed by the NSW Planning Department instead of Central Coast Council.

It will introduce a new Gosford City Centre State Environmental Planning Policy (SEPP) 2018 to replace existing CBD planning controls (Gosford Local Environment Plan 2014 and Development Control Plan), although many of the GLEP provisions will be included in the new SEPP. A new Development Control Plan (DCP) will be made by the Department of Planning to support the new SEPP, using the Government Architect’s recommendations.

The new SEPP would remove the 24-metre minimum street frontage requirement from the B4 zone in the CBD. The 24-metre minimum was to enable consolidation of smaller CBD lots to achieve efficient land development. Its removal would allow for “smaller and fine-grained development, particularly for sections of Mann St where fine grain building and frontages are part of the character of the area”.

A B3 Commercial Core zone will be retained but amended to allow residential development on the third level, with floorplates and ceiling heights that could be converted to commercial space. The B4 zone is to be expanded to increase the number of residents in the CBD and support greater retail and night-time activity. Proposed new controls will ensure that at least 50 per cent of Kibble Park and 70 per cent of Leagues Club Field receive sunlight for four hours between 9:00am and 3:00pm at winter solstice. A maximum podium height of three storeys around Kibble Park and along Mann St is proposed, along with maximum street wall and façade heights on certain sites. Sun access, street vista and view corridors have already been mapped. The Gosford LEP 2014 required proposed developments to exhibit design excellence but did not include a review process.

In the future, the recommendations of the Government Architect will “guide development proposals in the city by forming part of the heads of consideration for DAs”. If a developer meets requirements and enhanced design excellence processes, it will be simpler for them to get approval for increased height and floor space. No maximum height or floor space ratio (FSR)) have been specified in documents released by NSW Planning so far. “For smaller sites (<2,800 square metres or 36 metres street frontage), FSR controls will be simplified” but existing height controls remain.”

They will be allowed to increase their floor space ratio from 2:1 up to 4:1 for a wholly non-residential building. Medium sites (2,800 to 5,600 square metres or 36 metre or greater street frontage) will be able to seek height variations subject to a design review panel, additional commercial floor space and environmental measures. Large sites (5,600 square metres or greater) can access height and floor space variations subject to a design review panel, design competition process, minimum environmental performance standards, additional commercial floor space and a site masterplan. Developments valued at more than $75m will be State Significant, assessed by NSW Planning, and determined by the Minister, a delegate or an Independent Planning Commission, if Council, or more than 20 submitters, object, or the applicant discloses a political donation.

Those worth between $10m and $75m will be assessed by the Planning Department and determined by the Minister, delegate or Independent Planning Commission if valued at more than $40m and Council objects. Those valued at less than $10m will be assessed and determined by Council. The Joint Regional Planning Panel (JRPP) may still have a role to play in determining some CBD projects in the $5 million to $10 million range depending on the assessment process.

A Traffic and Parking Subcommittee has been established with representatives from NSW Planning, Council, Roads and Maritime Services, and Transport for NSW. It is proposed to move commuter car parking outside the CBD to within 800 metres to 1km of the station, and to identify sites outside the CBD for all-day parking with shuttle buses to the station. Mann St and other key places such as Kibble Park are to be pedestrian friendly and not used for building vehicle access. Car parking development standards are to be updated to provide “greater flexibility for the provision of parking above ground where underground parking isn’t possible or suitable” and “provide greater flexibility for reduced parking during DA stage.”

What about rebuilding the CBD’s infrastructure?

The proposed approach for delivering infrastructure is to: clarify Council’s and the Government’s priorities; make better use of money collected through developer contributions and increase the transparency of how those contributions are spent; align a range of public funding towards infrastructure priorities; and, support in-kind contributions. Civic improvement works will be accelerated, including: Kibble Park; Leagues Club Field; Burns Park; a potential new public space in the northern precinct; a new pedestrian and cycling bridge connecting the hospital and high schools with the core and north of the CBD; and, upgrades to the Donnison St and Etna St bridges over the railway line.” The report acknowledges that developer contributions won’t be enough for civic works. “Work will continue to prioritise public domain and infrastructure improvements based around the above works, with funding from the NSW Government, Central Coast Council and developer contributions used.” The Department of Planning will identify infrastructure and delivery opportunities. “The Department will provide growth data and infrastructure priorities to agencies, including Transport for NSW, Roads and Maritime Services, the Department of Education, and NSW Health, to inform capital programming. “The NSW Government will investigate opportunities to use the Housing Acceleration Fund to resolve infrastructure blockages in the Gosford City Centre, in the short term” as a way to support the delivery of the 13,000 new dwellings to be built in the CBD in the next 20 years.

Will developers be asked to contribute?

A Special Infrastructure Contribution (SIC) will be introduced, it will be a levy paid by developers to share the cost of delivering infrastructure “Development contributions collected in Gosford City Centre will be leveraged by the NSW Government, working with Council, to update the Civic Improvement Plan 2007, and introduce a SIC for the Gosford City Centre,” the consultation paper said. Since 2007, Council has collected $8.1m from developers earmarked for a waterfront precinct and cultural centre. Currently Section 94 contributions are set at 4 per cent but the new SIC will be 2 per cent and an updated local contributions plan will charge an additional 1 per cent. “The NSW Government will work with Council to expedite the delivery of local infrastructure set out in the Civic Improvement Plan 2007 through a targeted spending plan that will clarify which items remain a priority, where contributions are expected to be spent and the timeframe for delivery.” The SIC will be applied to projects worth over $1m. Developers are expected to pay between $20,000 to $1m in contributions. SIC monies cannot be used for water or sewer, and the consultation paper outlines how SIC payments will be calculated. The Government Architect will decide the final infrastructure list to coincide with the introduction of the SIC. Developers will also be able to ‘pay’ their SIC in the form of works in kind via agreement. All SIC contributions will be payable before developers receive a Construction Certificate.

What will happen to the Government Architect’s placemaking?

The Government Architect has identified the key places in the CBD, and the next step will be for CCRDC to appoint a Place Manager to focus on the use and activation of those places. Ms Shearer will be responsible for maintaining momentum around NSW Government-owned land and projects.

A façade improvement program will be investigated to help property owners improve the overall appearance of their buildings, coordinated by Council, GBID or CCRDC. The consultation paper looks at ways to make the CBD more attractive for visitors by offering art and music, entertainment, active nightlife and green open spaces. The new SEPP will allow Council and the CCRDC to develop, without consent, on any land, if the works are valued at less than $1m. “This would enable Council or CCRDC to undertake necessary infrastructure development and improvements to Kibble Park, Waterfront Park and Burns Place without delays.”

Will Council get its powers back?

After the Central Coast Council Comprehensive LEP has been developed and adopted, applications will be assessed by Central Coast Council in line with the relevant policies contained within it. Council is currently working on a Consolidated LEP, which rationalises the former Gosford and Wyong LEPs. Preparation of the Comprehensive LEP is a much bigger process that could take several years.

How can residents have their say?

The whole consultation paper and other reports can be found at www.planning.nsw.gov.au/gogosford but it is not called a consultation paper. The link you are looking for is Gosford City Centre Revitalisation Proposed Delivery Mechanisms.

Readers can provide feedback on the consultation paper by making an online submission at www.planning.nsw.gov.au/gogosford or emailing: centralcoast@planning.nsw.gov.au, or writing to Department of Planning and Environment, PO Box 1148, Gosford, NSW, 2250.

The Department will review all submissions and use this feedback to inform the preparation of the State Environmental Planning Policy and Special Infrastructure Contribution that will be presented to the Minister for Planning for consideration. Community members have been invited to nominate regional infrastructure that supports growth by making a submission at www.planning. nsw.gov.au/gogosford The Central Coast Regional Plan Information Centre, on the corner of Mann St and Donnison St, may become a reinvented information centre for the revitalisation of Gosford and a place for community members to go for information.

Submission questions whether restricted funds need to be paid back

Nicole is a finalist in the Ms Earth Australia competition