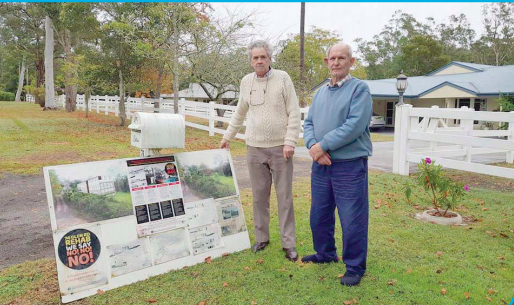 [Ourimbah] Residents of Glen Rd, Ourimbah, have vowed to take their opposition to a proposed drug rehabilitation facility, all the way to the Land and Environment Court if necessary.

They have employed a former Gosford City town planner to help them fi ght the development application, which they believe Council should refuse on many grounds. Mr Gary Chestnut, a former Gosford Council manager, has questioned the Central Coast Council’s interpretation of the law in relation to the latest contentious Glen Rd DA. “I strongly believe that the Council report has not interpreted the legislation as applied by the Land and Environment Court, or appropriately exercised its discretion,” said Mr Chestnut. “I observed within the Council report that staff have confirmed that the proposed development does not fall within the parameters of State Environmental Planning Policy Affordable Rental Housing SEPP (ARH) 2009,” Mr Chestnut said in a letter to all 15 Central Coast Councillors. “This is despite the request from Council in a pre-DA meeting that the applicant should address the SEPP requirements,” he said.

“I agree that the proposed development does not fall within the parameters of SEPP (ARH) 2009, however, the Council report does not identify on what grounds. “One of the grounds the application may fall outside the SEPP (AHR) 2009 is because the proposed development may not fall within the definition of a transitional group home. “The definition of a ‘transitional group home’ has been considered on multiple occasions in the Land and Environment Court. “The court has determined that a ‘transitional group home’ must contain both a kitchen and a laundry that operate in the context of a single traditional household. “In the current application there is a dilemma in law… caused by the fact that the consultant that prepared the on-site effluent management plan stated that, due to site characteristics, no kitchen or laundry should operate.

“Given the statement that the kitchen and laundry has not been designed to service the facility or that residents will not be undertaking domestic chores such as preparing meals and laundry activities for the common good, the question in law arises: does the proposed facility fall within the definition of a ‘transitional group home’?” According to Mr Chestnut, the EPA Act states that Council can’t grant consent unless it has taken into consideration the bushfire hazard, plus, the bushfire hazard must be assessed in accordance with ‘Planning for Bush Fire Protection’, prepared by the NSW Rural Fire Service.

The applicant has submitted two Bushfire Reports, the first of which was rejected because an adjacent property owner was not willing to provide a bushfire easement, and the NSW Rural Fire Service did not accept the analysis undertaken by the Bushfire Consultant to address the fact that the ‘transitional group home’ was required to be assessed under the special fire protection provision of the relevant law, and a consideration was introduced by the consultant that was not appropriate. “When Council forwarded the second Bushfire Assessment Report to the NSW Rural Fire Service, they advised the Service to assess the report against the residential provisions, rather than special fire protection provisions.

“I cannot understand the reasoning or logic as to why Council staff took this position,” Mr Chestnut said. “The legislation clearly states that a ‘group home’ which includes a ‘transitional group home’ for rehabilitation, must be assessed in accordance with the special fire protection provision. “The implications of assessing the application under the residential provision, rather than the special fire protection provision, are significant. “I believe the actions of Council are not only unlawful, but they are placing the safety of future residents and staff of the proposed ‘transitional group home’ into jeopardy,” he said.

According to Mr Chestnut, the residential provision requires a 20 metre inner protection zone (APZ), but the special fire protection provision requires it to be 60 metres. The applicant’s 35 metre proposal is compliant for the residential provision but falls well short of the special fire protection provision. “If Council was to apply a 60 metre wide APZ, this has other implications. “If you examine the location of the proposed facility to the centre of the adjacent creek, the distance is approximately 56 metres.

“Therefore, when you apply an APZ in accordance with the special fire protection provision, this will result in clearing vegetation four metres beyond the centre of the creek. “The riparian vegetation located along Dog Trap Gully has been identified as Coastal Wet Gully Forest, which comprises the Lowland Rainforest Endangered Ecological Community (EEC). “Therefore, clearing of the EEC in accordance with a 60 meter wide APZ will trigger Part 7 of the Biodiversity Conservation Act 2016.” Council has not considered or assessed the application in relation to the potential clearing of the EEC. The site is not connected to the Council’s sewerage network and requires onsite disposal of effluent.

“Neither the applicant nor Council has applied the [relevant] guideline and standard in accordance with the site characteristics or the scale of the proposed development. “The applicant has submitted an on-site effluent management plan based upon the design criteria for a single household. “A single household is defined as containing 10 persons, however, the proposal is for a ‘transitional group home’ with up to 20 persons. “The applicant, acknowledging that the effluent load is double that of a single household, and acknowledging the site characteristics, states that the facility cannot operate a kitchen or laundry. “By not operating a kitchen or laundry, the consultant preparing the on-site effluent management system calculates that up to 16,800 litres per week of effluent will be generated. “However, the design specifications for a single household are for 14,000 litres of effluent per week.

“This means that the amount of effluent generated by the transitional group home is 20 per cent greater. “If Council was to apply a 50 metre buffer, which is a 20 per cent increase above the guideline, and apply this buffer at the outer edge of the rainforest EEC, there is no physical space available on site for any onsite effluent disposal system. “As identified by Councillors at the Council meeting where it was resolved to undertake a site inspection, the social impact of a drug and rehabilitation facility is complex.” According to Mr Chestnut, Councillors are being requested to consider multiple variations in respect to bulk, scale, height, setbacks and character which the Council report is advising are acceptable. In his letter to Councillors, Mr Chestnut said he wished to draw their attention to facts that he believed had not been fully considered in the Council report. He pointed to the Wyong Development Control Plan 2013 which identified the need for developments to be compatible with the existing character of the area and appropriate for the context of the local area.

The height of the building needs to be compatible with the height, bulk and scale of the existing locality and ensure the amenity of the neighbouring properties, in respect to privacy, is protected. Hence the building height is set at 10 metres and should generally not exceed two storeys. “Three storey dwellings will generally only be supported on steeply sloping sites, where the three-storey component extends for only a small section of the dwelling, or where the lowest storey is contained predominantly within a basement level below natural ground, and the maximum building heights are not exceeded,” according to the Wyong DCP. “The proposed building height in the Council report states the building is 11.3 metres, however, the building height on the exhibited plans is 11.8 metres,” Mr Chestnut said. “Whatever the building height, … 88 per cent of the lower story is above ground. “The proposed building is not consistent with the development controls.

“In respect to bulk and scale, within the Council report, it states the proposed building footprint is similar in scale to adjoining development, so the proposed development is acceptable. “However, taking into consideration only the footprint of the building is not taking into consideration all aspects of bulk and scale. “Comparing the floor area of the adjoining homes, including verandas and garages, the proposed building is 4.2 times greater in bulk and scale compared to adjoining residences. “The Council report recommends that to address privacy, the first floor balconies on the eastern elevation are to be reduced from a depth of 2.95m to 1.64m, and that landscaping of the site will provide suitable screening.

“The so-called basement has a full length balcony attached to a function room. “The ground floor has another full length balcony and the top floor still retains balconies. “Consequently, from all sides of the building facing the residents at 72 Glen Rd, recreational areas are overlooking their property. “The Council report suggests that landscaping will provide privacy screening. “However, in accordance with the bushfire assessment, this vegetation screen is not allowed to grow into one another or overhang.” Mr Chestnut also said that he did not believe the Council’s report had properly taken noise impacts into consideration.