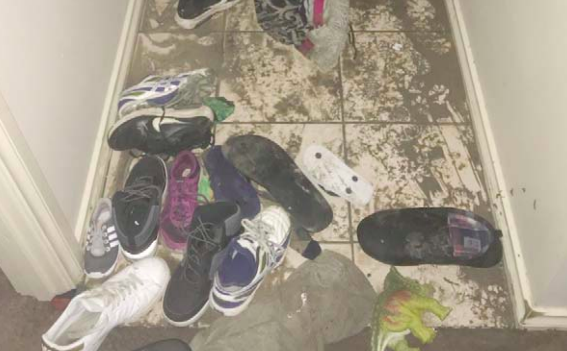 [Empire Bay] Central Coast Council’s insurance company has refused to accept liability for damage to an Empire Bay home and its contents as the result of a burst water main.

The house rented by Mr Clint and Ms Christie McIntosh and their four children was damaged on June 4 when a water main in front of their home burst. Mr McIntosh said the house was rendered uninhabitable as a result of the inundation caused by the water main failure and the family’s furniture, belongings and tools of trade could not be salvaged. Council agreed to assist with alternative accommodation four days later, but has refused to accept any liability for the damage under its insurance policy, he said.

On June 13, they received a letter from Central Coast Council’s insurance agent, Jardine Lloyd Thompson Pty Ltd, stating that the Council denied liability for the water main break and subsequent flooding of the home. “Council is not automatically liable for damage caused as a result of a burst water main,” the letter said. “In order for liability to follow, it must be demonstrated Council had knowledge of any issues with this particular water main and failed to stop it,” the letter said. “Council records show there were no issues with this particular water main prior to the incident. “When it was brought to Council’s attention, Council responded to the burst water main within an hour, which we consider was a reasonable timeframe.

“Our investigations suggest that the failure of the water main was a fortuitous event beyond Council’s control. “Our investigations did not find any evidence to suggest that Council did not act in good faith or that the damage to your property resulted from Council’s negligence. “In view of the above, we do not consider that Council has acted negligently or in breach of their statutory duty towards you in what was an unfortunate and unforeseeable incident. “Liability is therefore respectfully denied.” Ms McIntosh was at home with two of her four children when the water main burst, sending a torrent of high-pressure water down her driveway and flooding through her garage and house.

She was in the kitchen at the time and heard her four-year-old child scream. She opened a door into the garage to investigate and saw the torrent, shut the door and started to run through the house, deciding that she would take the children to a neighbour over the side fence.

“Before she could get out she realised they were stuck because from the back balcony to the fence was rapids. “My wife had to call to three men on the road who came down through the water, punched out the window and got the two kids and Christie out,” Mr McIntosh said. The family was uninsured and their landlord’s insurance would not cover the damage to their possessions. “We moved up here from Sydney and I just recently cancelled all my policies to transfer them into another policy to save money,” he said. The family could not stay in the house and the six of them had to stay in the one room at a relative’s home for the fi rst three nights following the fl ooding.

The landlord has let them out of the lease, but do not know where they are going to live. “We have no idea yet. We are applying for houses. “Council put us up at a hotel in Umina but that was after four days of house hopping between relatives.” Council agreed to pay for the temporary accommodation for the family until June 22. “Pretty much what we got out of the house was our clothes. “Our six beds are gone, along with furniture from two complete lounge rooms. “This was 14 years’ worth of stuff destroyed,” he said. Member for Robertson Ms Lucy Wick, helped Mr and Ms McIntosh write to Council setting out their case for compensation. Cr Jeff Sundstrom has started a community fundraising campaign for the family via his Facebook page.

Cr Sundstrom said he believed the family deserved to be compensated because their property was destroyed due to an infrastructure failure. “The state of Council’s water infrastructure and mains were matters that have been raised in Council by several councillors,” Cr Sundstrom said. “I have recently called for a report on the number of breaks across the new LGA divided into wards, over the past 10 years asking if there is a trend and if council has done anything that would affect the frequency of such breaks into the future,” he said. “I understand Council has implemented a program of flushing specifically around the Empire Bay area where the squeaky wheel has been over the last three months or so,” he said. Cr Sundstrom said he had not received any information from Council staff about the nature of the particular break but he had visited the property. “The place has been devastated,” he said.

“They were at a point that was one room that was liveable but that was without power. “They ended up staying with a brother-in-law and there were 10 people in a three-bedroom house for a period time.” Cr Sundstrom, who has worked in emergency services for the past 30 years, said: “Anybody that suffered the devastation of their home, no matter what the actual cause was, whether flood, fire or failure of infrastructure, has got a hard path ahead of them. “It is helped when the people affected have insurance but in these days when people are really counting their pennies, one of the things that does get left behind can be proper insurances.

“They will need to replace furniture, clothing, bedding, whitegoods, technology, TVs, and computers,” he said. Although Council’s insurance claims agent has provided a legal response to the McIntosh family, Cr Sundstrom said he hoped Council staff would consider a more humane response. “That will be the basis of my appeal to the acting CEO as soon as I can sit down with him,” he said. Water main breaks have been reported around the Peninsula on 12 occasions in the last four months alone.