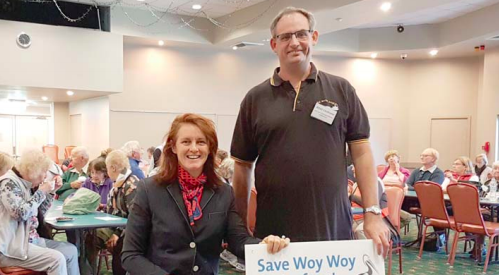 [Woy Woy] A community meeting, held at the Everglades Country Club on Sunday, May 27, voted unanimously to call on the NSW Government to re-acquire Crown Land that was sold to the owners of the Woy Woy Sporties land.

A triangular piece of Crown Land was purchased by Woy Woy Holdings, owners of the Sporties site on the corner of Brick Wharf and North Burge Rd, from the State in June 2015 for $38,830. It had been leased on a long-term basis by Woy Woy Bowling Club which facilitated its sale to Woy Woy Holdings for a price significantly below its market value. President of Save Woy Woy Waterfront community group, Mr Ross Cochrane, said the meeting had to be relocated from the Woy Woy CWA Hall to Everglades because of the strong community interest. “It was a very positive meeting and we ended up getting 97 people which was great considering we only gave four days’ notice of the venue change,” Mr Cochrane said.

“We also received quite a few apologies and some people also went to the CWA Hall and didn’t find out about the venue change,” he said. “The objective of the meeting was to pass on whatever information we knew about the development application for the Woy Woy Sporties site.” The $30.4 million development application would see integrated senior living accommodation built on the land along with a new clubhouse. “It was to tell them about the 84 submissions received by Central Coast Council in opposition to the development so we summarised what people were most concerned about in their submissions,” he said.

Of the 84 submissions made to Council, 66 raised concerns about flooding, tidal inundation and climate change making the proposed development unsuitable for the site, 60 expressed concerns about the development leading to loss of amenity around noise, traffic, parking, overshadowing, 57 said it was incompatible with the character of the area, 52 were worried about the loss of community space and the recreational area, and 42 said the bulk and scale was inappropriate. Other reasons for objecting to the DA included the uncertain future of the bowling club, objections to the retail leases, stormwater management, safety, threat to the fishing club, no mechanism to ensure the units would be habited by seniors and the crown land sale to the developer. “We also outlined what happens now as the development application progresses to the Joint Regional Planning Panel. “We let people know that it was not too late to make submissions to the Council.”

Mr Cochrane said Member for Gosford Ms Liesl Tesch attended the meeting to offer her support to the community’s opposition to what they consider to be an overdevelopment of the site on the corner of Brick Wharf Rd and North Burge Rd, Woy Woy. Independent Central Coast councillor Louise Greenaway also addressed the meeting. Deputy Mayor Cr Chris Holstein, a Gosford West Ward councillor, has declared a conflict of interest on the matter and Cr Richard Mehrtens gave his apologies. “When we talked about the sale of the Crown Land to the developer, it was a total ‘Oh my goodness are you kidding me’ moment,” Mr Cochrane said. “Someone moved a motion from the floor that the NSW Government re-acquire the block and it resulted in a unanimous show of hands so Save Woy Woy Waterfront will be calling on the NSW Government to re-acquire the Crown Land,” he said.

Ms June Mitchell, the 92-year old North Burge Ave resident who started the campaign, also addressed the meeting. “We also made people aware that if they put in a submission they will get an invitation to make a verbal submission at the JRPP hearing.” Save Woy Woy Waterfront also recruited around 30 new members at the meeting and started a petition to support their campaign. Mr Cochrane said Save Woy Woy Waterfront was also considering getting legal advice about whether or not permanent JRPP Panel member Mr Michael Leavey should be allowed to consider the Woy Woy matter when he was simultaneously acting as a consultant for a similar development at Koolewong.