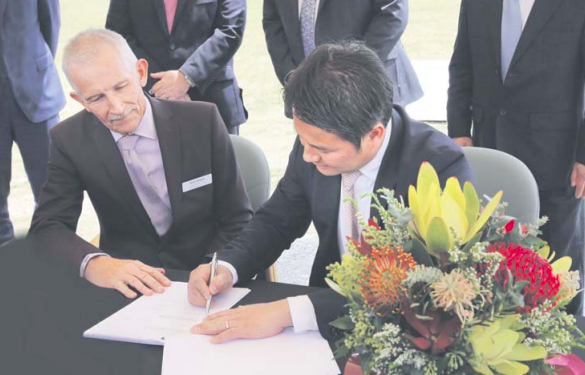 [Warnervale] A confidential agenda item, understood to involve a commercial dispute between Central Coast Council and Amphibian Aerospace Industries Pty Ltd (AAI), is expected to be the subject of a rescission motion on July 9.

Central Coast Council’s June 25 meeting agenda listed the item as “Legal Advice – Commercial Dispute” and gave no other information to the general public. AAI signed an agreement with Council while it was under administration, in October, 2016, to move its headquarters to the Central Coast Airport. Former NSW Premier, Mr Mike Baird, was present at the signing. An October 2017, resolution by the newly elected Council not to proceed with plans to expand the airport, placed Council in dispute with AAI.

Usually, confidential items, when listed on the agenda, give at least some insight into the nature of the matter to be discussed behind closed doors. When Councillors considered a procedural motion to deal with the matter in closed session, Clr Greg Best attempted to move an alternative motion to have it debated in open session which was seconded by Clr Rebecca Gale Collins. “This Council certainly credits itself with wanting to be open and transparent around these issues, and particularly the issue we all know is the centre of this particular item, which is in confidential at this point,” Clr Best said.

He said the significant issue could still be debated, in the name of transparency, in an open Council meeting, if redacting [blacking out of sensitive information in the document] was used. “There may be some strong redaction, but nevertheless, I think the general understanding of what the Council is trying to achieve should be made transparent to the community,” he said. Clr Best called for the item to be deferred until staff could issue a redacted version of the document to be discussed. “I think that we defer it, I don’t think that is going to create some huge issue,” Clr Best said. “Is there any legal reason we can’t hold it?” he asked Acting CEO, Mr Brian Glendenning.

“The item that is in confidential, considers the resolution of a significant commercial dispute. “Without naming who it is with, it sets out, without prejudice, correspondence from the other party’s solicitor, and then sets out legal advice, including advice from an external provider,” Mr Glendenning said. “The extent of redaction that would be required to enable that to be discussed openly, that is not in a closed meeting, would be so significant, that it would look something like, for those fans of MASH [TV series set in the Korean War] from years ago, the redaction of their letters, where there was nothing left except for the ‘the’ and the ‘and’,” he said.

“So while I understand the intention of the amendment, I think the reality is that there would still need to be consideration of an unredacted format in closed session for it to make any sense, it is pretty significant,” he said. “The external solicitors that are assisting the internal legal team to represent Council’s interests are being contacted regularly, saying ‘when are they going to resolve on this?’. “We have told them this meeting, we would have to go back and see what the outcome would be,” he said.

Clr Best said transparency and keeping debates in open session was “exactly what this Council argued as it took its seats at the last election, particularly on this issue.” Clr Best’s motion was lost and Mayor Smith’s subsequent motion to deal with the issue in closed session was carried. After the meeting, Clr Best said he could not comment on what the confidential agenda item was about, but confirmed that item 6.1 from the June 25 agenda, “would definitely be a matter for rescission”. Clr Best said he would also re-present his rescission motion on the resolution carried by Council last October, not to go ahead with a master plan to develop a general aviation business park at the Warnervale Airport.

This will be Clr Best’s third attempt to rescind that resolution, and if he succeeds, his alternate motion will be to survey the community about whether or not they would like to be consulted about an aviation business park at Warnervale. If the general public indicated support for such a development, Clr Best would move that the $450,000, five-stage business case for the development of the airport be placed on public exhibition. “The proposal does not and in no way contravenes, triggers, or requires changes to the Warnervale Airport Restrictions Act,” he said.

Warnervale Airport is not an airport but an Aeroplane Landing Area