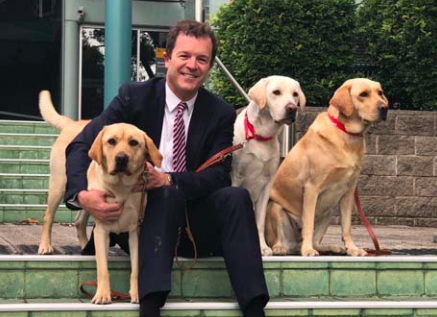 The new service connects therapy dogs with victims of crime, witnesses and other vulnerable people, and is being launched at 10 courts across NSW, including Gosford. “I spent many years in the busy and high-stress court environment, and as a dog lover myself, I have no doubt that having a few furry friends around will lift the mood of victims, witnesses, lawyers, police and court staff, Mr Speakman said. The rollout follows a successful trial of the program at Manly Courthouse.

“The Manly program received unanimous support, with anxious victims and witnesses feeling more relaxed and ready to give evidence after patting the helpful hounds,” Mr Speakman added. The NSW Government has previously invested $500,000 in Gosford Courthouse to install high definition audio-visual link facilities in all four courtrooms, allowing witnesses to provide evidence remotely, as well as in legal professionals’ rooms.

“These facilities not only offer vulnerable witnesses the opportunity to give evidence from outside the courtroom, they also allow the court to hear testimony from interstate and overseas witnesses ensuring more efficient hearings. “The NSW Government is committed to improving the experiences of court users during some of the most stressful times of their lives,” Mr Speakman said.