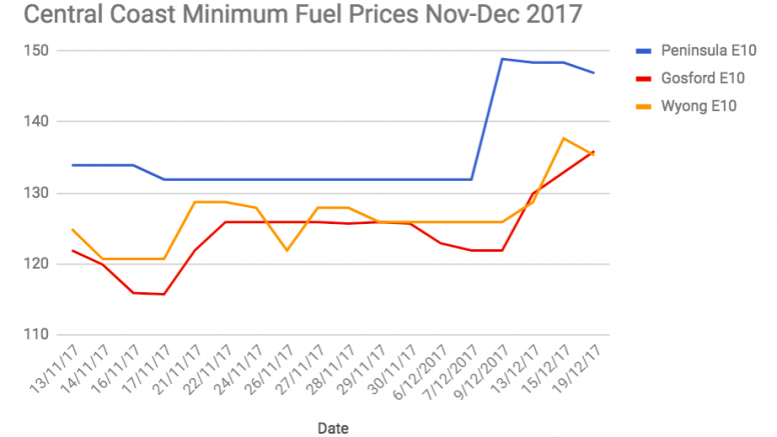 The Australian Consumer and Competition Commission has told the Member for Robertson Ms Lucy Wicks that it cannot act on the Peninsula’s inflated petrol prices.

It would only be able to intervene where there was evidence of illegal anti-competitive behaviour.

Ms Wicks said she had written to over 1000 residents who had signed her petition on petrol prices outlining the Commission’s response.

“Your voice has seen the competition watchdog take a close look at the petrol price issues you’ve raised on the Central Coast,” Ms Wicks said in her letter to petition respondents.

According to Ms Wicks, the Commission found that the average cost of regular unleaded petrol across the Central Coast market was 136 cents per litre in March 2018 which was, on average, three cents per litre lower than Newcastle’s average price for the same time period.

“They also did a spot check at Woy Woy and Gosford, which found as much as a 15 cents per litre difference between the highest and lowest E10 prices,” Ms Wicks said.

The Peninsula News has been tracking fuel prices for over 12 months and has found price differences as high as 35 cents per litre.

Ms Wicks said it was disappointing that the Commission would only take action if presented with evidence of anti-competitive behaviour.

“While this may be disappointing, we can work together to take action now by using widely available information on where the cheapest prices are on the Coast.

“There are a few apps and websites, like Fuel Check, which helps to find cheaper petrol and rewards retailers where the prices are lowest,” she said.

Meanwhile, the State Member for Gosford, Ms Liesl Tesch, said she would continue to urge Peninsula residents to exercise their consumer rights and, where possible, purchase cheaper petrol in nearby West Gosford.