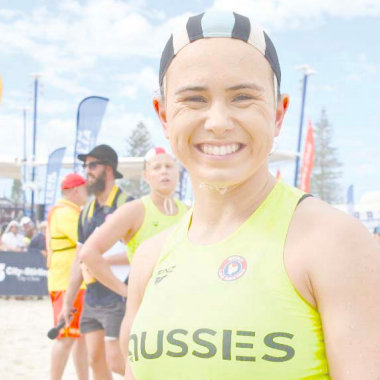 The team consisted of 14 Seniors, four Youth and 10 Masters competitors who battled it out in a variety of events. Overall, Umina managed 10th place in the final pointscore in a competition that pitted 6000 competitors from across 311 surf clubs against each other over nine action packed days that saw over 450 events. There were some impressive performances across the board by local clubbies, but no could come close to Umina’s surf sport superstar, Jemma Smith, who dominated the Under 19 Female Open category, even being named the Female Competitor of the Carnival, one of the Aussies highest honours, for the second time.

Smith’s surf lifesaving star has been on the rise for years and the young athlete is showing no signs of slowing down, having won nine medals during the Open. Smith secured two gold medals in the Under 19 Champion Lifesaver and Under 19 Single Ski events. Smith locked down four silvers in the Under 19 Ironwoman, Open Single Ski, Under 19 Board Race and the Board Relay; and earned three bronzes in the Under 19 Taplin Relay, the Rescue Tube Rescue and Surf Race events.

Smith shares one silver and two bronze medals with long time teammates, friends and fellow Umina clubbies, Mimosa Henderson, Jazmyn Rodwell and sister Bronte Smith. In all of her solo events Smith shined, never placing outside of the top seven positions in any of her heats or finals. Other Umina Clubbies who medalled at the Aussies included: Kirsten Miller who returned home with a gold in the Under 17 Champion Lifesaver and Mollie Murphy who returned with a bronzer in the Under 19 version of the same event.

The 40 Plus Champion Lifesaver event saw gold go to Kerry Armstrong Smith and silver to Christine Bishop. Some near podium finishes from Umina also prove the Club’s roster is one to look out for in upcoming events, with Lachlan Braddish finishing fourth in both the Under 17 Male Surf Race and Under 17 Male 2km Ocean Swim grand finals. Tom Rodham also got close to the podium with a fi fth place fi nish in the Under 15 Male Champion Lifesaver and a sixth place in the Under 14 Male Beach Flags. Some of the Masters also got agonisingly close with Ingram and Jowett recording fourth place finishes in the 45-49 Female Beach Flags and 55-59 Beach Flags respectively.

Umina may have been the Peninsula’s biggest success story at the Aussies but Killcare and Ocean Beach Clubs’ also gave the championships a red hot go. The best result for Killcare went to Mitchell Hayter who placed sixth in the Under 19 Male 2km Beach Run. Ocean Beach competitors made it to the grand finals in five events and medalled in four of them, with Phillip Tubby taking out gold in the 55-59 Years Beach Flags.