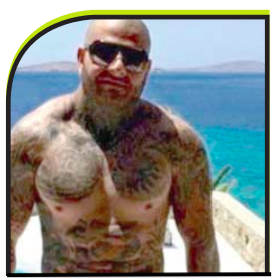 Mr Ricky Ciano, formerly of Wamberal, left the Rebels in 2015 and was found dead in 2017

Homicide Squad detectives have charged two men over the 2015 conspiracy to murder Mr Ricky Ciano at his home in Wamberal.

According to reports published by ABC News online, Mr Ciano was a former member of the Rebels Outlaw Motorcycle Gang (OMCG). “Officers allege Mr Ciano was targeted at his Wamberal home by armed bikie associates pretending to deliver a pizza,” the ABC report said. “They were thwarted when Mr Ciano refused to answer the door. “It is understood he was also armed.” In November 2015, the Police Criminal Groups Squad’s Strike Force Raptor commenced an investigation into the activities of the Burwood Chapter of the Rebels OMCG and their associates.

Their inquiries and investigations by the Homicide Squad led to hundreds of charges against more than 20 people. They remain before the court. Investigators had previously charged a now 29-year old man over the alleged conspiracy to murder, Mr Ricky Ciano, at his Wamberal home on Monday, August 17, 2015. Following further investigations, Homicide Squad detectives arrested two men, aged 25 and 29, at corrections facilities at Newcastle and Goulburn on Tuesday, May 22. Both men were charged with conspire and agree to murder.

They remain in custody to reappear at Burwood Local Court on Thursday, June 7. Homicide Squad Commander, Detective Superintendent Scott Cook, said investigations were very much ongoing. “The Homicide Squad is working side-by-side with Strike Force Raptor and pursuing a number of lines of inquiry relating to the chapter’s activities,” Det Supt Cook said. “This includes a strong focus on the links between groups, as well as those who associate with and between the groups.”

Det Supt Cook said a separate investigation was being conducted into the circumstances surrounding Mr Ciano’s death in 2017. “Strike Force Kiaka was established after Mr Ciano’s body was located in his car at Oberon on Valentine’s Day in 2017,” Det Supt Cook said. “We are continuing to piece together his movements over the weekend, but based on the information we have gathered, the conspiracy is not related to his death.”

Locals expected to star in para-archery and canoe events