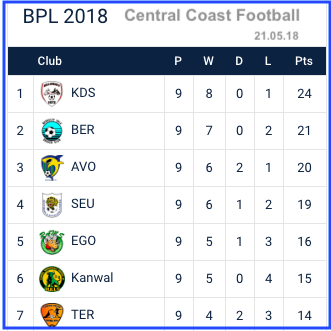 The top of Central Coast Football's Battlewin Premier League Table as of May 21, 2018

There was no change at the top of the 2018 Battlewin Premier League (BPL) table after Round 9. However, Avoca moved up to a season-high third.

East Gosford climbed into the top five at the expense of Terrigal, whose loss to Killarney District also saw them overtaken by Kanwal. In the match of the round, Terrigal faced down Killarney District. Terrigal took the match right up to the premiers for most of the first half, and eventually broke through for a deserved lead in the 44th minute, from a free kick that was parried by Killarney goalkeeper, Declan Drake, for Daniel Bird, to follow up and score.

Then just two minutes later and deep into added time, the Terriers struck what proved to be a major psychological blow, with, Cameron Donovan, equalising with the last touch of the half. Despite a rapidly deteriorating voice, Killarney coach, Chris Ackerley, was able to re-motivate his team and the game swung noticeably their way for most of the second half. A brilliant drive from the edge of the penalty box by, Daniel Moffat, gave them the lead for the first time, 10 minutes into the half, before, Andy Klijn, sealed the win with a similarly sensational strike in the 75th minute.

East Gosford clashed with Umina in their Round 9 match. It was the first Premier League match under lights at Umina Oval since the formation of the competition in 1982, and attracted a large crowd. It was a bittersweet occasion for East Gosford coach, Chris Powell, returning for the first time against his former club, one which he’d led to two Premier League grand final wins (2008 and 2011), as well as a third (2006) as assistant coach. He asked his team for an early goal to quell the home crowd and got it in the 8th minute through, Rob Walton. Ten minutes later, Jarryd Beckman, levelled the score, before, Dave McKellar, put the Rams back in front in the 30th minute.

East Gosford continued to dominate, with, Neil Woodcock, scoring what proved to be the winner midway through the second half. Avoca met with Southern Ettalong in their bout. For the past three seasons, Avoca and Southern-Ettalong have, for the most part, sat in the No-Mans-Land of the BPL competition, occasionally pushing towards the top four, but more often than not, battling to ensure that they avoid relegation. Not so in 2018, with them going into this deserved Match of the Round both sitting in the top five, and having been beaten just once each in their previous eight matches.

It was yet another excellent performance by this impressive Avoca outfit, that in just over a year, in 21 matches, are unbeaten against all BPL clubs, with the exception of premieres, Killarney District. To score three times against Ettalong, who have the second-best defence in the League, while at the same time keeping a clean sheet, marks them as serious title contenders. A third-minute goal by, Stuart Adams, set the scene for what was otherwise an even first half, with limited scoring opportunities for either side. After the break, the match opened up, with both sides hitting the posts, but although the Sharks gradually took control, the result remained in the balance.

Then, not long after a, Keith Gumbs’, shot struck the Avoca crossbar, a powerful drive by, James Monie, in the 80th minute, effectively settled the result, with Adams then putting it beyond doubt with an unstoppable shot in the closing minutes. Gosford City were toppled by The Entrance in their match. It was a vital match between two of the recent BPL high- fliers who are now struggling in the bottom third of the competition. Both clubs were beaten in their first four matches of the season, but are now showing signs of pushing up the ladder, with Gosford having won three of their previous four matches. As expected, it was a tight and evenly-contested match, with both teams missing a number of scoring chances, and good goalkeeping at each end of the field.

The breakthrough came midway through the first half when The Entrance’s new signing, Massi Mobin, scored in his first starting top grade appearance for the club. Unfortunately for Mobin and his team, he then went from hero to zero, when he was sent off five minutes later for a dangerous tackle. Despite playing for the remaining hour with just 10 men, the Reddies knuckled down and were rewarded when, Zac Anastas, was tackled inside the Gosford penalty box, and, Matt Kenny, converted the resultant penalty for what proved to be the winner. In the last game of the round Kanwal gave Kincumber the boot.

It was the highest scoring match of the round, with Kincumber scoring bookend goals, the first in the second minute of the match, and the third in the second-last minute. After trailing, Kanwal equalised, with, Ryan Walker, on target from a, Danny Rotondo, cross. Early in the second half, Retondo was again in action, with a corner that, Ryan Oehm, headed home, for a 2-1 lead for the Bulls. The same two players then combined again just one minute later, leaving Walker to tap-in for his second goal of the match and his 10th of the season. Kincumber fought back hard and reduced the margin to a single goal in the 67th minute, only for Kanwal’s, Bailey Chaplain, to make it 4-2 in the 74th minute, but then endure a tense final few minutes as the Roos scored their third.

Wicks calls for defi brillators at all sports fields