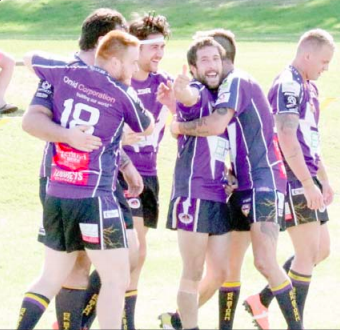 The Storm managed to break through for their fi rst win of the 2018 season, emerging victorious from a ding-dong Doyalson duel that had seen the lead change fi ve times during an absorbing second half scrap. Livewire fullback, Billy James, completed an afternoon to remember, racing over for a hat-trick of tries, including the match winner, which was scored when he ran off, Brendan Eather, with 10 minutes remaining on the clock.

Travis Mantell, Mitch Redding and Craig Starr were strong in centre fi eld, while the blistering speed of, Jesse Murray, was again in evidence, when he raced 70 metres in an arcing run to cross out wide during a spectacular passage of play. In juniors action, the Gosford Kariong U15(2)’s maintained their winning start to the season; scoring an emphatic 52-10 win over Erina. An even opening had seen both sides completing their sets flawlessly, however, Gosford managed to surge ahead late in the half with a series of long-range tries, building a 28-0 lead at the break.

By fulltime, the Storm boys had crossed for 10 tries in total, with back-rower, Isaac Vuna, and fullback, Jack Turnbull, both notching hattricks. The best try of the day featured a crisp outside-inside combination of passes, as the lightning hands of, Gokhan Emeli, caught and then delivered in an instant a perfectly timed short ball, finding a rampaging, Isaac Vuna, with the former Asquith forward racing away to score a spectacular Gosford try.