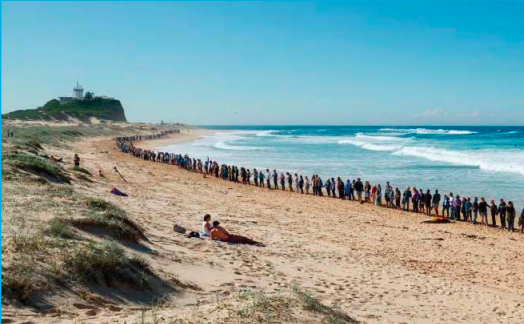 [Central Coast] The NSW Parliament has called on the Federal Government to suspend Asset Energy’s licence for any further offshore petroleum activity in the waters off the Central Coast until concerns raised about lax commonwealth regulations have been addressed.

The motion, proposed by The Greens Member of the Legislative Council, Mr Justin Field, said that Asset Energy conducted seismic testing for gas off the coast of Newcastle and the Central Coast in April. “The licence area, Petroleum Exploration Permit 11, covers an area off the NSW coastline from Sydney’s Northern Beaches to Stockton,” Mr Field’s motion said. “Seismic testing involves underwater blasts that can impact the health of whales, dolphins and other marine animals. “It is understood that the company is expecting results from the testing within the next two months, and plans to start drilling in 2019.

“The community, including concerned individuals, commercial fishers and tourism operators, expressed strong opposition to the testing, and the NSW Minister for Resources, Mr Don Harwin, expressed concerns that the regulatory regime under which the approval and testing occurred is not at a high enough standard. “This House calls on the Federal Government to suspend further consideration of applications for PEP11 until such time as the regulations for offshore petroleum exploration and production have been reviewed, in light of the concerns expressed by the Minister for Resources,” the motion concluded. In April, in response to a question on notice from Mr Field, Mr Harwin said he lacked confidence in Australia’s current offshore mining regulations. According to Mr Field, the company’s timeline of proposed activity includes conducting more invasive 3D seismic testing this year, and plans for digging exploratory wells off the NSW coast in 2019.

Mr Field said the Federal Government should acknowledge the NSW Government’s concern with inadequate offshore petroleum regulations and suspend Asset Energy’s PEP11 licence for offshore oil and gas exploration and production. “Seismic testing … caught the community by surprise, but they’re now united in demanding no oil or gas fields off the NSW Coast,” he said. “The community simply won’t accept it, despite industry trying to bully the government into approving these risky projects. “The Greens welcome the NSW Parliament’s strong stand in support of a pause on Asset Energy’s licence, but it doesn’t go far enough.

“The Greens ultimately want offshore petroleum activities banned. “We need to keep fossil fuels in the ground to mitigate the worst consequences of climate disruption. “The New Zealand government recently announced a ban on new oil and gas exploration in its waters. “The Federal Government should follow its example and do the same here. “Our oceans are special places for people’s enjoyment, a source of sustainable seafood, and a precious home for whales and other marine life.

“The Federal Government must not give in to the vested interests of the fossil fuel industry, pushing for oil and gas development off our coast at any cost,” he said. Wyong Regional Chronicle has asked the Federal Member for Robertson, Ms Lucy Wicks, Some days ago, whether or not she would support the call of the NSW Parliament for a suspension of the exploration licence. A response has not been received. Meanwhile, Mr Gary Blaschke, National President of the Disabled Surfers’ Association, has called on Central Coast Council to form an alliance with other affected local government areas to call for a ban on testing and oil and gas exploration off the NSW coast. “Having taken thousands of people with profound disabilities for a safe and happy surfing experience for over three decades, from Collaroy Beach to the Hunter, and all around Australia and New Zealand, any threat to our beaches and way of life becomes a very personal issue,” Mr Blaschke said.

“Senator Matthew Canavan, Minister for Resources, and the Independent advisory body, NOPSEMA, seem to think that potential deaths of whales and dolphins is acceptable, and as low as reasonably practicable,” he said. “No threat to our whales, dolphins, fish or our way of life, with potential rigs sitting off our iconic beaches, would be accepted by any of our communities. “Therefore, I am calling on all Councils, from the Northern Beaches of Sydney, Central Coast, Newcastle and Port Stephens, to form an alliance to say no and ban seismic testing, and tell the Australian Federal Government, absolutely no. “If it was good enough for the New Zealand Government to ban seismic testing, then why isn’t it good enough for Australia?”

Read the back stories here – related articles on this site

Taking a step back to pre-COVID times