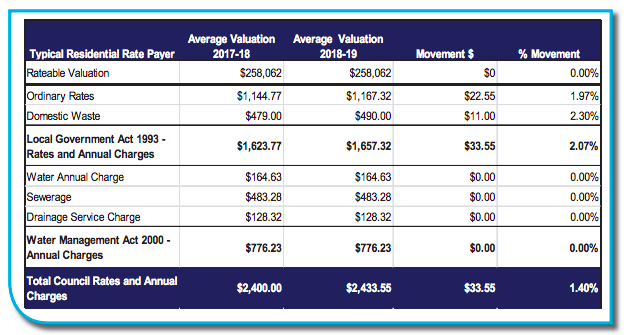 Residents and ratepayers have one month to comment on a draft of the historic first combined Central Coast Council Delivery Program and Operational Plan for the 2018-19 financial year.

The 2018-19 Draft Delivery Program, Operational Plan including the budget and draft Resourcing Strategy are among a suite of documents Council has placed on exhibition for public comment after being endorsed at the May 14 Council meeting. Council aims to achieve a tiny surplus of $64,000 but an average ratepayer from the old Wyong LGA will see their rates go up by $33.50 for the year.

Mayor Jane Smith said it was now the community’s opportunity to write to Council to let them know where they’ve got it right and wrong before the plan was adopted and rates officially set on June 25. Council’s plan aims to deliver $561.5 million in essential services and $199.8 million in capital works in priority areas from the Community Strategic Plan (CSP). Those priority areas include the road network, water and sewer service, infrastructure, protecting and enhancing the local environment, community facilities, open space and recreation. Mayor Smith said the draft plan was the beginning of an evolving culture within Council that was more responsive to, and better reflected, community priorities and aspirations in line with the CSP. “This is our contract with the community,” Mayor Smith said. “It details every project and initiative we will deliver over the next year with a strong focus on financial and environmental sustainability,” she said.

“We will be delivering just a small surplus, $64,000, as we want to invest every dollar we can on delivering the services and infrastructure our growing community have told us they need, want and value.” Hundreds of projects are planned right across the Coast in the $199.8 million capital works program. Major projects include: $1.3 million to deliver the Norah Head Masterplan and deliver key amenity upgrades in the key tourism area; $2 million to construct the Mardi to Warnervale trunk water pipe; $1.8 million for a regional skate park and play space at Lake Munmorah; and $2.5 million to finish construction of the Central Coast Regional Sporting Complex at Tuggerah. “Our community have identified their vision of where they want to see the Coast grow and be in 10 years’ time.

“This draft Operational Plan outlines a clear promise to our community, a promise we look forward to delivering.” In addition to rates and charges, the Council expects to receive $48.4 million capital grants and contributions to fund its $199.8 million capital works program. It is proposed that 78 per cent of operating and capital expenditure will be invested in the following priority areas: roads, transport and drainage ($186.92 million or 24.6 per cent of total spend). Water and sewer will see a $196.12 million total spend or 25.8 per cent of budgeted funds. Waste services and business development have been allocated a total $89.92 million or 11.8 per cent of total spend.

Open space and recreation has been allocated $45.13 million or 5.9 per cent, leisure and lifestyle $16.81 million or 2.2 per cent, and waterways and coastal protection $20.01 million or 2.6 per cent. Natural and environmental assets have been given a total budget of $18.2 million or 2.4 per cent of total spend; learning and education $9.46 million or 1.2 per cent; and libraries $11.36 million or 1.5 per cent. A rate path freeze for merged councils still applies for Central Coast Council. This means Council is required to maintain the rate path that was last applied by the former Gosford and Wyong Councils until June 30, 2020. The freeze in the rate path is not a freeze on the amount Council can levy by way of rates.

The Independent Pricing and Regulatory Tribunal (IPART) has approved an annual rate peg increase so Council’s permissible rates income for 2018-19 is the sum of the rates income for each of the former local government areas as if the amalgamation had not occurred, plus the allowable rate peg. For 2018-19 IPART approved a rate peg of 2.3 per cent. The rates and annual charges applicable to a residence in the former Wyong LGA with an average unimproved land value will increase $33.50 or 1.4 per cent in 2018-19 which is made up of a $22.55 increase in ordinary rates and an $11 increase in domestic waste charges.

Maps showing the parts of the Local Government Area to which each category and subcategory of ordinary and special rates proposed will be available at the Council’s Wyong office (and Gosford office). Final adoption of the plan and making of rates and charges will take place at the June 25 Council meeting. Council has encouraged the community to make submissions on the draft plans via yourvoiceourcoast.com, Council libraries and offices at Wyong and Gosford. Submissions will be received up until 5:00pm on Thursday, June 14.

Delta spreads across the Central Coast