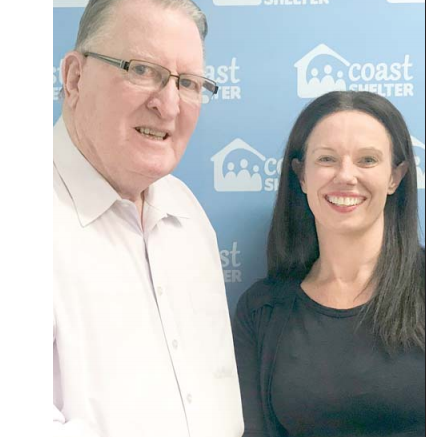 The Board of Directors of Coast Shelter has announced the appointment of, Ms Rachel Willis, as its new Chief Executive Officer.

Following an extensive recruitment process, the replacement for, Mr Laurie Maher, who is retiring, was confirmed by President, Mr Gavin Shepherd.

Ms Willis will commence duties on Monday, June 25, and will work with, Mr Maher, in a handover role until his retirement on Friday, July 27.

“It was great to hand over to Rachel, who has a real passion for helping the homeless and disadvantaged,” Mr Maher said.

“Rachel’s extensive experience will be of great benefit to Coast Shelter as it moves forward,” he said.

Ms Willis, over the past 20 years, has worked in NSW Government departments. Ms Willis is a Central Coast resident who has worked in the social justice environment
for many years.

In accepting the role, Ms Willis said: “I am honoured and excited to have been selected by the Coast Shelter Board to lead this extraordinary organisation into the future.

“Coast Shelter has a wonderful culture, delivering an exceptional suite of services to our Central Coast community and building further on this success is a challenge I accept with confidence, determination and fierce ambition,” she said.

“I will continue to follow Laurie and the team’s lead passionately, placing our clients at the absolute centre of everything we do.”

Coast Shelter is holding an Open Day at its Community Centre on Sunday, July 15, to celebrate Mr Maher’s retirement and Ms Willis’s appointment.

All community members are invited to this festival event at 11:00am.

CWA has it in the bag