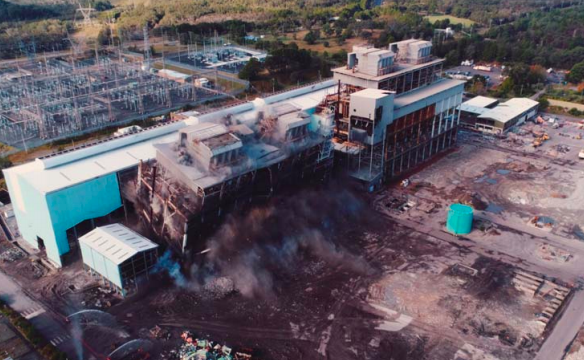 Generator Property Management Limited, owners of the old Munmorah Power Station site, have applied to Central Coast Council to amend their application for demolition of the power station.

Central Coast Council has approved the amendment under delegation and the matter was not required to be advertised. The amended consent will modify the demolition of the former power station, located at 301 Scenic Dve, Colongra, that was approved under DA413/2014. A condition has been amended to allow dewatering of the east-west longitudinal cable tunnels. According to a Central Coast Council assessment report: “The condition was imposed to restrict works in the drainage and cable tunnels and works within the canal lots. “The restriction of works in the drainage and cable tunnels was due to the contaminated groundwater found in the vicinity of the cable tunnels. “Following the shutdown of dewatering works at the site between 2014 and 2017, an increase of groundwater levels has resulted in migration of historic hydrocarbon contamination (known as the diesel plume). “This caused hydrocarbon vapours at the ground surface.

“Reinstatement of managed dewatering of the east-west longitudinal cable tunnels and the collection and treatment of water in the dirty water drainage system appears to have lowered shallow groundwater levels and decreased hydrocarbon vapours at the surface. “The utility corridors and trenches south of the turbine halls also appear to act as barriers to the diesel plume migration. “Demolition of the cable tunnels will remove this barrier, allowing the contaminant to spread. “Therefore the removal and filling of the cable tunnels is to be deferred until further monitoring of the site is undertaken during and after works, to determine the extent of remediation required. “The dewatering however needs to continue to manage the groundwater. “As such, condition 2 should have allowed for the continuation of the dewatering of the east-west cable tunnels, however, the modification approved on May 8 did not allow any dewatering to occur.

DA/413/2014/B was approved on May 8 for amendments to allow below ground demolition works, on-site disposal of asbestos-containing materials, and the removal of infrastructure associated with the outlet canal and water reservoirs. “The modification was approved with the exception of the works in the canal lots and the sealing and filling of the east-west longitudinal cable tunnels. The latest application for modification of DA413/2014 is ‘C’.

Pilon calls on council to accept responsibility for all waterways