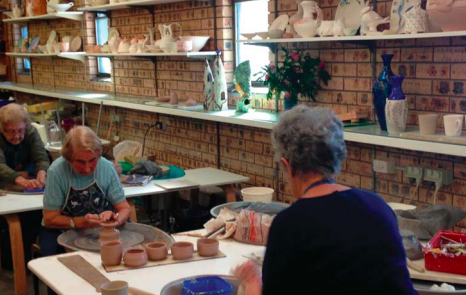 The Central Coast Potters’ Society turned 50 in 2018, and Society member, Ms Denise Gonzales, has reflected on where it all began.

“Much clay has passed through many hands since the inaugural meeting of the Central Coast Potters’ Society,” she said. “Five local potters, Margaret and Roger Keane, Harry Arnall, Kitty Orvad and Joan Matthews, held a public meeting on January 26, 1968, with the purpose of establishing a society of potters; a society which would work to increase the knowledge, experience and skills of members and students in the craft of pottery, and promote a greater appreciation and understanding of pottery to the general public.

“Fifteen attendees of that first meeting became the founding members of what is now the Central Coast Potters’ Society (CCPS),” Ms Gonzales said. “Originally housed in a rustic shed vacated by the Terrigal Scouts, CCPS had a vision to one day have its own workshop. “In 1980, thanks to the tireless fundraising efforts by a membership that had grown to over 130, a successful grant, and Gosford Council’s provision of the land, the Potters’ Workshop in Russell Drysdale St, East Gosford, was completed. “Fifty years on, today’s members are proud to be part of a long line of clay workers and pay tribute not only to the founding members for their foresight, imagination and dedication, but also to those members who came after to carry the vision forward.

“We are celebrating our 50th birthday with many diverse clay-related activities: An exhibition in Gosford Regional Gallery, Lines of Inspiration, opening on Friday, May 25 until July 15. “An exhibition in the Community Gallery, Gosford Regional Gallery, Elemental, from Friday, June 1 until Wednesday, June 13. “A joint exhibition with Newcastle Studio Potters Inc, Jubilee, at Back to Back Galleries, Newcastle, from June 29 to July 15. “All three exhibitions involve members both old and new, and are a testament to the talent and enthusiasm of CCPS members,” said Ms Gonzales. “The building contains kilns, pottery wheels, library, kitchen and a substantial workshop space. “If it is to do with pottery, we are interested,” she concluded.