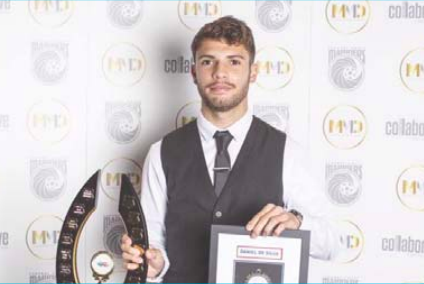 Ben Kennedy has earned top honours at the 2018 Mariners’ Medal after being voted by his peers as the best Central Coast Mariners’ player during the Hyundai A-League 2017/18 season.

Kennedy capped off an impressive season by winning the club’s top gong at the Mariners’ night of nights, held at Terrigal Crowne Plaza. The Mariners’ Medal, the most prestigious individual award of the night, is decided on a 3-2-1 basis, selected by the players during the Hyundai A-League season. The 31-year-old shot stopper made 23 Hyundai A-League appearances this season, which was enough to automatically trigger a second season with the Mariners. The club’s newest Mariners’ medallist has now confirmed his future on the Central Coast until at least the end of the Hyundai A-League 2018/19 season.

Danny De Silva was the other big winner of the night, picking up three awards in his first season with the club. De Silva claimed the Men of Football Damien Brown Medal, voted by the Central Coast Chapter, as well as the Central Coast Mariners Official Supporters Club Player of the Year Award. The 21-year-old attacker was also the recipient of the Noel Spencer Goal of the Year Award, thanks to his combination with Andrew Hoole in Round two against Western Sydney Wanders. De Silva’s 63rd-minute length of the field team goal at Spotless Stadium was voted and decided upon by Mariners’ fans in an online poll.

The club’s Golden Boot Award was split between Blake Powell, Andrew Hoole and Connor Pain, who all bagged four goals each this season Josh Nisbet was rewarded for his outstanding season by winning the Foxtel National Youth League player of the year award.

The Chairman’s Award has presented annually to an exceptional individual, within the Mariners, who is deemed to have gone above and beyond for the benefit of the Club. Affectionately known as Dan the Membership Man, Daniel Challinor, Central Coast Mariners’ Membership and Ticketing Manager, received the award for his tireless efforts in the community for the past three Hyundai A-League seasons, and longer as an intern. Nicholas Bessant took home the Volunteer of the Year Award for his continued commitment to the Yellow and Navy.