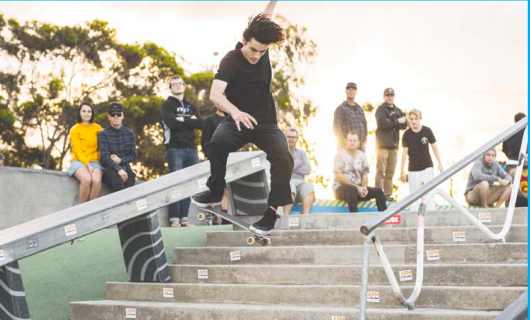 The event, which forms part of Shredability’s King of Concrete series, attracted a heavy line up of pre-qualified competitors from all corners of Australia, including the local skateboarder, Sam Sutton, Forresters Beach, who won the Open title, and, Rob Pace, from The Entrance, following in second place. Additional to this event boosting tourism and the local economy, the national accreditation brings formal endorsement of Bato Yard as a world-class venue for competitive skating.

Events like these showcase local talent and provide an opportunity to be scouted for upcoming development programs leading to the 2020 Tokyo Olympics. Registered competitors vied for a $12,000 prize purse and had the opportunity to gain points toward an ASF national ranking.

The winning competitors in each category were: Sam Sutton, NSW, Open Men’s; Hayley Wilson, Vic, Open Women’s; Zac Vanzetti, ACT. 16 and Under; and, Daniel Wooley, NSW, 12 and Under. The event was also attended by members of the Australian National Skateboarding Team, including Brad Saunders, Kat Williams, Hayley Wilson, and Liv Lovelace, with some flying in straight from recent international competitions in China.