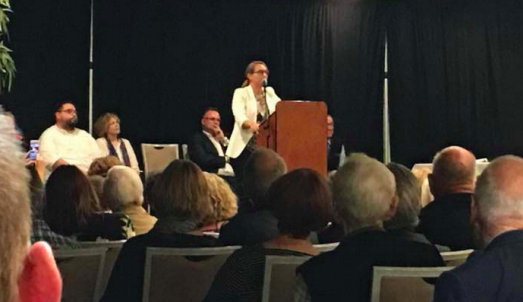 Liberal councillors and Members of State Parliament have claimed victory for the community following the decision by Central Coast Council to apply for 50-50 dredging funding.

East Gosford Ward Liberal Cr Rebecca Gale Collins said she moved the urgency motion on behalf of the community focusing on the need for urgent dredging work in Ettalong Channel. “In a stunning backflip, the Labor majority voted for Central Coast Council to submit a compliant Rescue Our Waterways grant application with 50 /50 matched funding with NSW State Government,” she said. “The Council also resolved to apply for emergency dredge funding from State Government.” Cr Gale Collins said “this is a real win for the community and demonstrates the power of the people. “Last Thursday night, over 400 people attended the Ettalong Diggers community forum to discuss the urgent need for dredging of the Ettalong Channel. “Tonight, people were overflowing from Council Chambers as they came to hear the motion of urgency about dredging Ettalong Channel.

“The closure of Ettalong Channel is imminent if dredging work is not carried out immediately,” said Cr Gale Collins. “As a local, I promised the community members that I’d bring a motion of urgency on the dredging issue to Council this evening, and I delivered on that promise. “Last week, all ferries were indefinitely diverted from Ettalong Beach and Wagstaffe over to Patonga on the grounds of public safety.” Liberal Member for Terrigal Mr Adam Crouch said the result of the Council meeting was a big win for the community.

“I thank every single local resident who made their views known to Council by attending last week’s public meeting, last night’s Council meeting, or by signing the online petition,” Mr Crouch said. “Plenty of other councils along the NSW coastline fulfil their responsibilities, and I’m really pleased that our local council has finally decided to fulfil their responsibilities. “It is extremely disappointing that for months, the Member for Gosford, her Labor Council colleagues, and some Independent Councillors have put politics before people, and are still continuing to do so.

“This was clearly on show for all in the gallery to see last night. “For more than 12 months, I have been strongly encouraging Council to apply for Rescuing Our Waterways funding, so I’m really pleased that Council have now committed to submit a compliant application for this fund. “It’s a pity that Council have taken so long to reach this position, given the condition of the Channel continues to deteriorate. “This week I will be meeting with Minster for Lands and Forestry, Paul Toole, to advise him of last night’s Council meeting outcome.

“In addition to the Rescuing Our Waterways co-funding opportunity, I will also raise with him the possibility of State funding for further emergency maintenance dredging work to ensure the Ettalong Channel remains open and safe for all. “Over the coming weeks, Department of Industry staff will be meeting with coastal councils in NSW to discuss potential dredging projects and provide advice on applying for Rescuing Our Waterways. “As I have consistently said, the NSW Government stands ready to assist Council wherever possible, and I will continue to do everything I can to support our local community.”