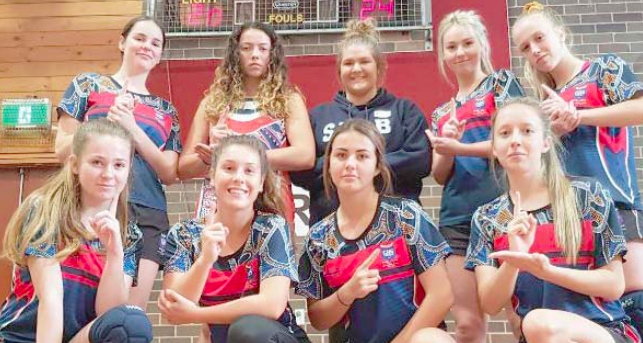 Gorokan High School’s Open Girls Volleyball Team has progressed to the semi-finals of the Sydney North Volleyball Knockout Competition, making them one of the top 4 best Open Girls teams in the state.

“On May 4, the team travelled to Concord High School to play in the fourth round of the Sydney North Volleyball knockout,” said Principal, Mr Sam Ricketts. “The girls demonstrated some tremendous Gorokan values in teamwork, spirit and resilience, to win a come-from-behind match in the previous round against Gosford High School, and were confident that their winning form could continue on the road. “The initial starting time was pushed forward at the last minute, due to umpire availability and the cold weather, alongside a rushed warm-up, resulting in poor preparation, both physically and mentally for the girls. “Consequently, they lacked rhythm, communication and technique, and lost the first set 25 to 17.

“There were some really positive signs, and at the break, we identified some key areas in which we showed promise, as well as areas for improvement, and the girls rallied together and demonstrated some outstanding volleyball to comfortably win the second set, 25 to11,” Mr Ricketts said. “Another positive discussion during the break of play had the girls in high spirits and the teamwork and skill on display was some of the best we have produced so far in the competition.

“The girls went on to win the following two sets 25 to 16 and 25 to 20 respectively, to win the match in an inspiring three to one victory. “The girls are now one of the Top Four teams in Sydney North as they progress to the semis. “A huge effort considering a staggering 37 teams entered the competition, and none of the girls play volleyball outside of school. “The girls should be extremely pleased and proud of their efforts and how well they have represented Gorokan High school in the competition to date,” Mr Ricketts said. Source: Website, M

Gorokan High School program to be presented at World conference