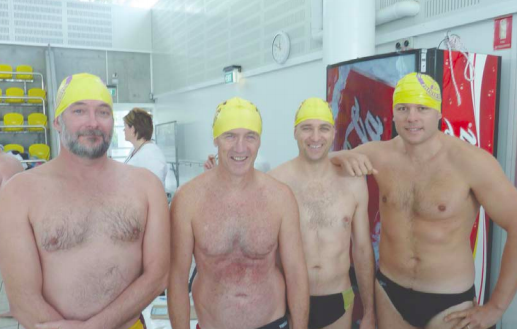 The swimming carnival will be held at the Peninsula Leisure Centre Woy Woy on July 1. There are nine clubs involved with more than 200 competitors. The clubs are Port Macquarie Walruses, Forster-Tuncurry Mudcrabs, Stockton Jellyblubbers, Newcastle Pirates, Merewether Mackerels, Dixon Park Coldies, Tuggerah Tuffs, Umina Blue Swimmers and the Killcare Frigid Digits. The events are in age groups from over 85 years down to over 18 years in open 50 metre races. Age related relay events are also contested.

These Championships are an all-male competition which has been contested annually for over 45 years. Killcare has successfully hosted these Championships on previous occasions. The Frigid Digits were formed and affiliated with the Winter Swimming Association in 1976. “Since inception, we have always been a family club having a senior active male, female, kids and associate members,” said club president Mr Ron Malcolm. “Our season runs from April to the last Sunday in August.

“We swim every Sunday during the season at Putty Beach, Killcare, in the ocean over 30 and 50 meter distances on handicap times. “New members are most welcome to join in the fun and competition,” Mr Malcolm said. This year, as in the past, members who are not competing for assist with officiating at the carnival. All clubs that are competing are not-for-profit organisations and only exist through membership fees and raffles. “It’s a fine line in breaking even after meeting the various costs involved in conducting these Championships. “Should any business wishing to become a sponsor by way of a cash donation or give a voucher for raffle purposes we would be very appreciative,“ Mr Malcolm said.