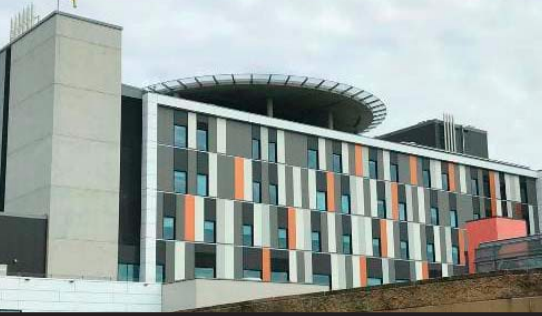 As mouldering portable battery that caused the evacuation of patients and staff from the outpatients’ area in the new Gosford Hospital Tower, on May 2, forced CEO, Mr Andrew Montague, to address concerns that some employees had not received safety training for the new building.

Health Services Union (HSU) organiser, Mr Brendan Roberts, said the HSU had been raising issues about staff being properly orientated to the new Gosford Hospital tower since February 1. “This included emergency and fire training, for example, the location of emergency exits and fire extinguishers, as well as general layout orientation,” Mr Roberts said. “Gosford Hospital failed to fully undertake these orientations and as such HSU placed a work ban, stating that none of our members working in the Environmental Services Department would undertake any duties in the new tower or facility unless they had been fully orientated,” he said. According to Mr Roberts, on May 2, “there was a fire that we understand resulted in both staff and patients being fully evacuated.

“Thankfully, it appears that this situation was handled well, however it raised the issue of what would have happened if it occurred in an area and involved staff that were not orientated,” he said. Mr Roberts said he consulted HSU members shortly after the incident and “they still did not know where the fire extinguishers were located.” HSU held an urgent meeting with its members on May 3 to demand that all Environmental Services staff were orientated and trained immediately. CEO of Gosford Hospital, Mr Andrew Montague, appeared on NBN News to address the union’s concerns. Environmental Service Department staff include cleaners and patient services, assistants. “Environmental services are some of the most transient staff in the whole organisation, they can be in any location at any time because their duties are cleaning and the portering of patients between wards or to Xray,” Mr Roberts said.

By May 2, only 123 out of the 245 environmental services department personnel had been orientated for work in the new tower. “The focus has been on the environmental services group because they are the ones who will be doing jobs all over the hospital every day, they are the group of people who do need to know and have a fairly good understanding of where things are, and I think it is things around knowing where are the exit points, fire extinguishers and duress buttons.” Mr Roberts said the HSU believed staff from other departments within the hospital were also “flying by the seat of their pants, trying to find places in the new tower using maps.”

As of Friday, May 4, all remaining environmental services personnel had been rostered and scheduled to do their official safety and general orientation training for the new tower. “There were opportunities, but because the department was so busy, staff were not being released to attend the training. “It is a good start but it is still not ideal given we have been asking about this since February 1,” Mr Roberts said. He said the HSU had ongoing concerns regarding Gosford Hospital having enough Environmental Service staff to undertake the increased levels of duties the new tower will create.

The movement of patients and staff into the new tower is underway, with several wards being transitioned per week, and the whole transition is expected to take between six and seven weeks. The redevelopment of the hospital will not be complete for another 18 months, as it involves refurbishment of the existing buildings and completion of the new car park. “They have said they are going to employ 15 full-time equivalent environmental services staff now, but we don’t believe that is necessarily going to be enough in the long run. “Those positions are being advertised now, so it will be three to four months away to get new staff in and trained up. “We believe they should have had those new staff on already,” he said. Coast Community News has asked the Central Coast Local Health District to respond to Mr Roberts’ concerns.