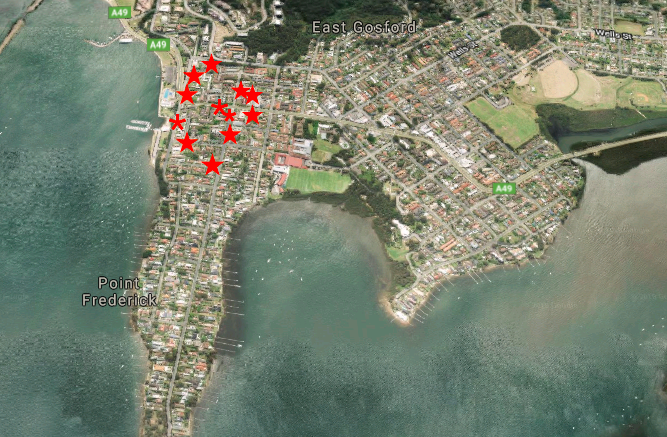 Point Frederick has always been a sought-after address in Gosford, but it is currently undergoing a transformation, spurred on by its inclusion in the Gosford City Centre bonus height and floor space provisions for developers from 2014 to 2016.

Before the Central Coast Regional Plan 2036, the former Gosford Council had a master plan for the city that identified targeted areas for residential growth to achieve an increase of 10,000 persons in 6,000 dwellings by the year 2031. As a result of parts of Point Frederick being included in the City Centre, the quiet and leafy streets of the narrow peninsula are being transformed into a modern medium density residential area. In fact, the development controls introduced by the former Gosford Council have meant that areas like Point Frederick’s built forms are consistent with, or even greater than, those permitted in most equivalent Sydney metropolitan centres, or within Newcastle.

Many of the residential developments, featured in the fourth part of our series on the revitalisation of Gosford City, have been built on consolidated single dwelling allotments. This area is within walking distance to the Gosford Sailing Club, St Joseph’s Girls’ Catholic College and St Edwards Christian Brothers Boys’ School, and Gosford Olympic Swimming Pool. The area is well-serviced by buses which give it connectivity to East Gosford and Erina, and to the CBD and inter-city trains.

The main zonings are B4 mixed use and R1 general residential, but for developments lodged up until April 2016, a 30 per cent height and floor space bonus was available. Several applications between 2014 and 2018 have attracted widespread opposition from the community for being too bulky and over-scaled, hence restricting visual access to Brisbane Water, which has been one of the traditional charms of this neighbourhood. However, the developments, with some amendments, have been given consent by Council or the Joint Regional Planning Panel.

Coast Community News has looked at 12 new residential and mixed-use developments, worth over $250m that will create more than 350 new homes in the city.