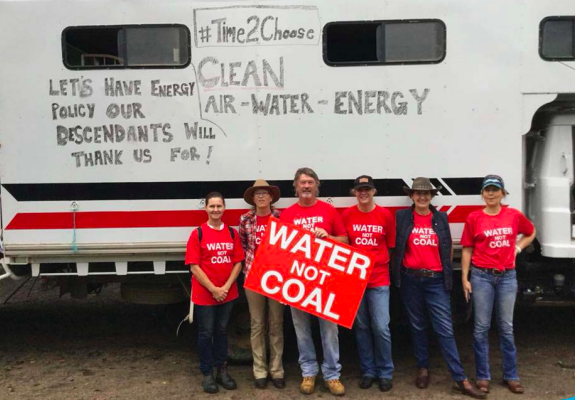 Funding of $200,000 will be provided by Central Coast Council to the Australian Coal Alliance (ACA) to engage experts to support its Land and Environment Court (LEC) proceedings against the Wallarah 2 coal mine.

Clr Kyle MacGregor put the motion, which will support the Australian Coal Alliance’s LEC judicial review proceedings to challenge the consent for the mine granted by the NSW Government’s Planning Assessment Commission (PAC). Councillors made the decision to back the ACA following Council’s receipt of its own legal advice, kept confidential, from three sources: Ian Hemmings SC, Ms Kate Lindeman and, form Council’s own Senior Counsel, Mr Martin Ball. “The Hemmings Advice and the Ball Advice each contain legal advice to Council by highly experienced legal practitioners,” a staff report to the May 28 Council meeting said. Council resolved not to commence similar and overlapping judicial review proceedings, and not to seek leave to intervene in the existing proceedings.

The $200,000 to be provided to ACA will be for “the specific purpose of engaging a suitable expert(s) to provide evidence in the proceedings in respect of the issues of concern to the Council, noting leave must first be granted in the judicial review proceedings for such expert evidence to be presented.” Acting Chief Executive Officer, Mr Brian Glendenning, will enter an agreement with ACA, and, if necessary, the solicitors acting for ACA, that provides for proper and transparent accounting of the funding by Council, and the return of any funding that ACA might be able to recover through a costs order in its favour. Councillor MacGregor said the funding was “a small price to pay to fight to protect our water catchment supply and other Council infrastructure that would be impacted by this mine.”

The Planning Assessment Commission (PAC) approved, under delegated authority, the Wyong Areas Coal Joint Venture’s (WACJV) proposed coal mine beneath the Central Coast’s major water catchment supply area, on January 17. Merit appeal on the decision is no longer available, but a challenge to the validity of the approval can be made under judicial review.

The Australian Coal Alliance (ACA), the community group that has spearheaded opposition to the mine project for more than 20 years, lodged its challenge to the validity of the approval on errors of law. A summons was served on Wyong Coal Pty Ltd, the mine proponents, KORES Australia Pty Ltd and the Minister for Planning, on April 16, commencing action in the LEC. “It is the ACA who has now been left with the task to continue the fight, through the courts, to protect our water catchment supply district, the billion-dollar water infrastructure of Council’s water corporation, and other Council infrastructure, from the destructive impact of a longwall coal mine,” Clr MacGregor said.

“The ACA commenced this action … because it is in the public interest to ensure that major projects in NSW are assessed and approved by Government decision makers in accordance with all relevant laws and policies, and that the environment, including Central Coast’s water supply, is protected for the use and enjoyment of current and future generations. “Council has supported the ACA and the community in its opposition to the WACJV coal project for 12 years, and Council has spent considerable funds on expert reports that have validated its continuing opposition to the WACJV coalmine project. “The community would expect nothing less than Council to continue its support of the ACA. “It indeed behoves Council to do so.” In an interview prior to the meeting, Clr MacGregor, said: “The whole point of the motion is to support the community in maintaining the position Council has always had.

“It is about protecting our water supply and making sure that decisions made in the past have been reached correctly, and if there is anything wrong with that process, it will come out during the LEC,” he said. After the vote, Mayor Jane Smith, said she was very pleased that the majority of Councillors supported the allocation of $200,000 to assist ACA in their legal challenge to engage experts. She said the former Wyong and Gosford Councils had consistently, and often unanimously, opposed the mine. “So it was disappointing to see some fracturing of that unanimous position,” she said.

“Our water supply is an essential service and it is paramount that Council protects it, and what is clear is that the community is unified in its opposition, and Council needs to stand with its community.”

“I also want to commend ACA for its continued opposition and consistent efforts in opposing the mine.” Mr Mike Campbell, of the Australian Coal Alliance, told Council that Senior Counsel had advised ACA that its prospects of success were extremely good. “The process that the Environmental Defenders Office follows is simple. “It decided that there were grounds to challenge, but it was only then upon Senior Counsel advice that the EDO was prepared to challenge the mine,” Mr Campbell said. He said $200,000 was a small contribution “considering what is at stake. “In almost 23 years, we have never asked Council for a donation. “We always thought that if it got to this point, we would seek funds from Council, as our legal costs are sizeable,” he said. All four Liberal Councillors, Clr Rebecca Gale Collins, Jilly Pilon, Chris Burke and Troy Marquart spoke, and voted, against the motion.

“This motion is not about whether one does or does not support the coal mine, it is about spending $200,000 to support one particular group,” Clr Gale Collins said, and described the motion as “outrageous”. Clr Marquart said: “I am not sure this is a motion, I think it is raw emotion.” Labor Councillor, Doug Vincent, said: “A Liberal State Government said they would legislate for the mine to not go ahead but did they do it? “No, so now the Council has to provide funding to support a community association to fight to stop the mine. “Now we are having to spend local government money to do what the NSW Government would not do.” Mr Alan Hayes from the Australian Coal Alliance said: “I am very disappointed at the four Liberal Councillors that they don’t see it as important to protect the Central Coast water supply. “After all, I am sure they turn a tap on when they want a drink of water or they want to shower or flush a toilet. “They just want to toe the party line of a dishonest and untrustworthy government,” Mr Hayes said.

“Council has expended huge amounts of money to engage the best experts in the country, and the answer has always been that this mine would be an unmitigated disaster,” he said. “The 10 grounds we are challenging this on were all things the mining company was bound to do, and the PAC was supposed to take into consideration, under the Mining SEPP and the EP&A Act. “This is a unique case that will never probably raise its head again on the Central Coast. “At the end of the day, the ACA and the time that its members have put into this is not about any accolades or pecuniary benefits, it is not about anything else but protecting what we enjoy today, what past generations have enjoyed, and what future generations are entitled to enjoy. “At the end of the day water is too important,” he said.