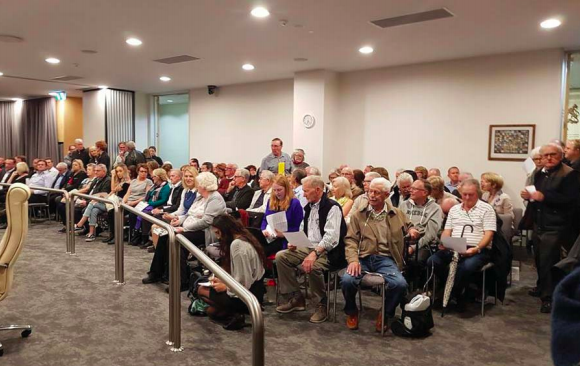 Central Coast Council has agreed to apply for 50-50 funding to dredge Ettalong Channel following a fortnight of sustained community and political pressure, which saw 400 residents attend a meeting at Ettalong.

The Council has also called, again, for the NSW Government to complete another round of emergency dredging to ensure the navigation channel is at least restored, temporarily, to a navigable state. The indefinite cancellation of ferry services to Ettalong and Wagstaffe prompted a well attended community meeting at Ettalong Diggers on May 10. Following the meeting, chaired by Diggers chief Mr Bill Jackson, Central Coast mayor and councillors were advised of a motion calling for “joint funding by Council and State Government for dredging of the Ettalong Channel area this month”. “A meeting attended by over 400 people was held at the Ettalong Diggers Club tonight, called by Ettalong Diggers, to discuss the problems caused by the suspension of the ferry service to Ettalong and Wagstaffe, and its diversion to Patonga,” Mr Jackson said in his post-meeting letter to Councillors. “It is requested that Council consider this matter at its meeting to be held on Monday, May 14,” the letter said. “The following motion was passed unanimously by those present at the meeting, for consideration at the Council meeting next Monday (motion proposed by Ms Peta Colebatch, seconded by Mr Peter Mote):

That this meeting requests both the State Government and the Central Coast Council to work together to fund immediate dredging works (this month) so that the ferry service to Ettalong and Wagstaffe can resume (the Council to submit a compliant application for funding to the State Government next week); and that this meeting requests that in the longer term, a working party of stakeholders assess the appropriate approach for the future, looking at maintenance dredging, technical issues, environmental implications, community impacts (including work, tourism, educational issues), and funding. “A number of comments were made at the meeting, some concerning different viewpoints on funding responsibility. “However the community strongly expressed the need for immediate action so that normal ferry services can be resumed. “People at Patonga are having difficulties also, from the presence of the ferry there and the impact of parking. “And there are major tourism, business, recreation, family, and educational impacts, with people’s work being curtailed (for example, builders using the ferry to get to Palm Beach) and family visits also being stopped.”

It was standing room only in the Gosford Chamber of Central Coast Council on Monday, May 14, as the community rallied to support the Ettalong meeting’s call for an immediate end to the impasse between Council and the State Government. An urgency motion was circulated to members of the public and media but, according to Central Coast Council Mayor Cr Jane Smith, none of the councillors had informed her that there was an urgency motion to be put. The meeting proceeded according to the agenda, frustrating the packed gallery until Cr Greg Best announced there was an urgency motion but left it to Cr Rebecca Gale Collins to move the motion. The debate was heated and frustrating with loud interjections from the public gallery leading to Cr Smith calling for a 15-minute recess.

Gosford West Ward Councillor Richard Mehrtens utilised the recess to write an amendment which he said better reflected the sentiment of the community meeting than the urgency motion that Cr Gale Collins put to the meeting, understood to have been written by Cr Greg Best. “We finally moved a motion that the dredging of the channel was a State Government matter so we are still holding the government to that standard and the majority of councillors still have that same belief,” Clr Mehrtens told Peninsula News following the meeting. “Now what the Council is doing is being the more responsible level of government on this while the State is still throwing up roadblocks,” he said. “This is a thing that was made very obvious at the Council meeting on Monday night, the State Government has the authority to dredge this channel, which is Crown Land, whenever it chooses to do so, it owns a dredge and on two occasions in the past 12 months it came in one day, did its scraping and left,” he said. According to Cr Mehrtens, the Council’s decision to apply for 50- 50 funding under the Rescuing Our Waterways program would not provide an adequate solution to the problems facing the entrance to Brisbane Water. “The funding available is completely inadequate and that was one of the reasons we were reticent to support applying under Rescuing Our Waterways,” he said.

According to Council the maximum that can be applied for by the state is $1.3 million and it may take until January 2019 for the outcome of the 50-50 application to be known. However, Councillors have been informed by staff that the annual cost of maintaining the channel is more than the total $3 million that would be made available via a 50- 50 agreement and then it would be at the mercy of the State to provide the funding annually. “We do need a longer term program for this waterway, otherwise the State Government will be holding Central Coast Council to ransom every year. “If we received $400,000 one year and then missed a year it would take more than $800,000 the following year to get it back to an acceptable standard. “We have no guarantee we will get the maximum $1.3 million when the maximum available for all coastal councils is $6 million and we are up against 13 other councils,” Cr Mehrtens said. “The North Coast has a specific list item for dredging in the State Budget each year but we have to sit here and wait.

“We arrived at Council on Monday night under the impression there would be an emergency motion but when the Mayor asked each of the councillors she was told ‘no’. “When Cr Best arrived later the Mayor also asked him and he replied ‘no’ but they were planning to introduce the motion the entire time and to do so without any notice, without allowing the other councillors time to read it was incendiary. “It didn’t reflect the motion that Bill Jackson and the public meeting had decided on so it was necessary to introduce an amendment to get something agreeable but it is not a long-term solution,” Cr Mehrtens said.

Link to our 20 dredging related stories