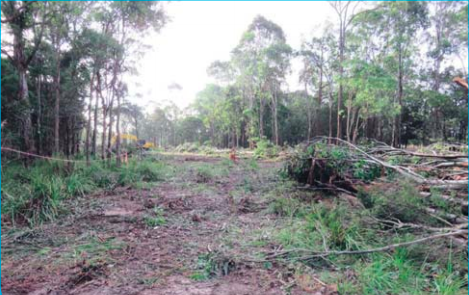 The application was lodged in 2017 as part of works to accommodate the Amphibian Aerospace Industries’ (AAI) hangar within the Central Coast Airport site at Warnervale. However, Council cleared the land prior to even lodging the DA. The reasons for the refusal were that the proposal would have had an unacceptable impact on Endangered Ecological Communities (EECs) under the NSW Environmental Planning and Assessment Act 1979, and the Threatened Species Conservation Act 1995. Council’s reasons for refusal also included that “no development control plan (DCP) applies to the site to allow for the development application to be approved, as required by Clause 6.3 of the Wyong Local Environmental Plan 2013.

“The proposed development would not be in the public interest as it pre-empts the Biocertifi cation process underway and detailed planning required for the area under Section 79C(1) (e) of the Environmental Planning and Assessment Act 1979,” the refusal letter said. Amphibian Aerospace Industries intended to establish an amphibious aircraft manufacturing business on the site. According to the Landrum and Brown Central Coast Aviation Hub Planning Summary, tabled at the November 27 meeting of Central Coast Council, AAI would construct, at their cost, hangars and ancillary buildings to support the business.

“AAI has leased 5.2 hectares of land in the north eastern section of the aviation hub,” said the summary, which Central Coast Council has resolved not to pursue. “Under the terms of the AAI lease agreement, Council agreed to relocate Jack Grant Ave and associated services, to include the 5.2 hectare site into the Aviation Hub. “AAI have development approval for stage one of a two-stage project. “Stage one of the AAI project is the construction of the assembling aircraft hangar and office space. “Stage two of the AAI project is the main manufacturing facility, where the Albatross will be manufactured.”

AAI is the holder of the US Federal Aviation Administration Type Certificate for HU-16 and G11 Albatross military utility aircraft, and G-111 Models A-E Albatross civilian aircraft. On securing the intellectual property rights associated with the FAA Type Certificates, AAI launched Project Amphibian to refit existing Albatross aircraft and manufacture new Albatross. Wyong Regional Chronicle asked Central Coast Council to outline the status of its contract with AAI. In a written response, Council said: “Discussions between Council and AAI are confidential. “Council will not make further public comment on those discussions.”

Central Coast Council also confirmed that the resolution it made on November 27 in relation to the Airport stands. It confirmed Council’s support for the Warnervale Airport Restrictions Act and resolved to suspend all works, land acquisitions and expenditure on the Airport, except if required by law. The DA for the land clearing was lodged by Central Coast Council retrospectively, that is after it had cleared the native vegetation at 140 Sparks Rd. In addition to clearing the E2 land without seeking consent, Council did not rezone E2 to IN1 prior to undertaking the clearing work to pave the way for industrial development. Silt fences were not installed during the clearing work. Around 8,000 square metres of E2 land was cleared. The former Wyong Council studied the area at 140 Sparks Rd in the WEZ Biocertifi cation Report of 2007 and that study identified the threatened Melaleauca Biconvexa is present on the site. The site was purchased by Council in 2016-17 in the full knowledge that it contained Biconvexa and that full development may be constrained by that species.

Biconvexa is known as existing on the E2, IN1 boundary, an area believed to be have been cleared by Council. On July 13, 2016, Council resolved to undertake a Biodiversity Certification Project which included the 140 Sparks Rd property, despite much of the land having already been studied as part of the 2007 WEZ Biocertifi cation. The Certification process was estimated to cost between $300,000 and $350,000 in Council business papers. The project, to start in July, 2016, was due to be completed in October, 2017, but as of May, 2018, there had been no public exhibition of the assessment, which was due to occur in February, 2017. The purchase of 140 Sparks Rd by Wyong Council was to be contingent on the completion of the Warnervale Biocertification Project, but on March 10, 2016, then Mayor, Doug Eaton, put in a Mayoral Minute that the resolution to purchase the site be amended to remove the words “conditional upon WSC achieving bio-diversity certification approval by the NSW Minister for the Environment”.

Where did all the money go?