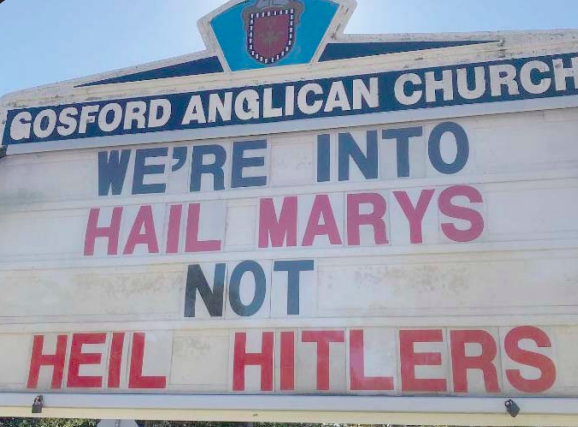 The letter board at the front of Gosford Anglican Church

Gosford Anglican Church was invaded by a group of alleged ultranationalist neo-Nazis.

On May 19, The Church’s Saturday night mass was interrupted by five Melbourne men, belonging to Nationalist far-right group, the Cooks Convicts. One of the men entered the congregation wielding a whip, whilst another was brandishing a fake sword, according to Fr Rod Bower. “This was an extremely traumatising event,” said Fr Bower. “Fortunately, many regular parishioners were absent, so the devastation was somewhat minimised. “This was in my view a terrorist attack. “One cannot imagine that had these men been Muslims, they would have been allowed to walk away from this act of violence and intimidation,” Fr Bower said. “These people are to Christianity what Isis is to Islam.

“This attack shows how far we have gone down the road of right-wing extremism. “Such an attack on a church could not have been imagined only a few years ago,” he added. The Cooks Convicts filmed the incident and posted the video to their Facebook page. The footage begins by condemning Fr Bower’s left wing and at times controversial approach to teaching the Christian faith. This commences with a monologue, believed to have been recorded by Cooks Convict leader and the instigator of the May 19 Church incident, Mr Neil Erikson. Mr Erikson said Fr Bower had been “Pissing a lot of people off, especially Christians. “He claims to be a Christian, but as Jesus always said, many will come in my name and Rod Bower’s one of them.

“He supports gay marriage, he supports Sharia Law, he blesses the Burqa and he disrespects our ANZACS. “Rod Bower gives all of his worship to his ego,” Mr Erikson said. Following these statements, the video shows the Cooks Convicts interrupting Fr Bower’s service. The congregation is shown to be visibly disturbed by the intrusion, with one woman screaming in fear, as Mr Erikson, dressed as Jesus, and the other Cooks Convicts, enter the chapel. In the footage, Fr Bower is shown to ask the men to leave, whilst Mr Erikson, through a megaphone, proclaims: “What have you done to my house? “You have desecrated my father’s house,” Mr Erikson was seen to say before Fr Bower and his congregation began singing a hymn until the Cooks Convicts left. Mr Erikson was then filmed in front of the Church’s letter board, which frequently features some of Fr Bower’s more controversial messages and teachings, cracking a whip. He then continued his tirade and attack on Fr Bower’s character.

Still invoking the image of Jesus Christ, Mr Erikson is seen to say: “What you have done to the Christian church is unforgivable. “You have desecrated the house of God. “This man is a traitor to his religion. “He’s a traitor to my father’s house. “This man is a media harlot; he doesn’t care for me or my father. The matter is now in the hands of Gosford Police and the church is conducting yet another security review. This follows a similar confrontation in August 2016, where members of the now defunct Party for Freedom, disrupted a sermon, dressed in traditional Muslim garb. Mr Erikson was one of the members of the Party for Freedom that took part in the 2016 Church raid as well. Following the incident, Fr Bower wrote on the Parish’s Facebook page:

“We will not be silenced. “These ‘Christianist’ terrorists used violence and intimidation to try and silence our message of love and inclusion,” he wrote. On May 21, the Church’s letter board had changed to “We’re into hail Marys, not heil Hitlers.” Fr Bower will appear on the panel on the ABC’s Q&A on Monday, May 28.