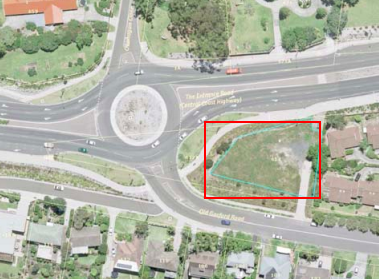 The proposed childcare centre site at Wamberal, outlined in red.

An application for a childcare centre at 612 The Entrance Rd, Wamberal, has been refused by Central Coast Council.

The refusal was carried following Council’s consideration of a supplementary report on the DA at its May 14 meeting. Councillors voted against a staff recommendation to grant consent for the development. The same DA had been considered, but not determined, when Council met on December 18, after which the applicant submitted amended plans and Councillors met with residents, to discuss concerns raised by the Wamberal Action Group.

Additional public notification of the DA resulted in the receipt of 11 more submissions, all objecting to the proposal, including a 120- page submission from the Wamberal Action Group. Four speakers addressed Council regarding the proposed $1.1m childcare centre. Mr Richard Wells, from the Wamberal Action Group, said: “This proposal should not be approved, is not compliant with planning rules. “If it were, I wouldn’t be here,” Mr Wells said. “There is not one single piece of council, state or federal planning that permits a childcare centre to be built across from an intersection, and traffic flow on the Central Coast Hwy is extremely high.” Mr Steve Nixon spoke against approval “on the grounds of safety concerns and loss of local amenity.

“We have already lost children and teenagers around our streets,” Mr Nixon said. “The DCP, state and national guidelines say the site is not suitable,” he said. Mr Nixon then highlighted what he called “selective facts” in the Council’s assessment report. “There is no adequate addressing of blinding sunlight in the afternoon, this issue will not go away, no matter how many guidelines the Council wants to work outside.” Council’s Director, Environment and Planning, Mr Scott Cox, said: “The report is not misleading, it is a matter of interpretation. “In terms of relevant guidelines, it has been assessed against childcare SEPP and guidelines related to the SEPP, and it meets the requirements. “In terms of the Gosford DCP, four variations were identified, and according to the EPAA, where compliance can’t be met, then the objectives of the DCP need to be considered.” Mr Cox said he had four engineers look at the proposal, including an external consultant who peer-reviewed staff’s assessment.

Mr Robert Bateman, owner of Little Miracles Childcare centres, spoke in favour of the proposal. “We currently care for 1,000 people a week, young children, and would we put those children at risk? “No way! “There will be a safety barrier and a 4-tonne sandstone wall around the centre, so if ever anything comes off the Central Coast Hwy, it won’t be going into our childcare centre.” A motion to approve the DA was moved by Clr Troy Marquart and seconded by Clr Chris Burke. “We have to put these sort of facilities somewhere on the Central Coast; we have had four different safety engineers look at this,” Clr Marquart said.

Clr Jeff Sundstrom spoke against the motion: “Whilst I appreciate great work being done by Little Miracles, I hold concerns, meaning I won’t support this application in its current format.“There are too many variations to allow it to go through, and whilst each individual variation might be acceptable in isolation, we need to look at the bigger picture,” Clr Sundstrom said. “This building pushes the envelope and the community is pushing back,” he said.

The motion was lost, and Central Coast Mayor, Jane Smith’s, alternate motion for refusal of the DA was carried.

The refusal was based on the proposal’s non-compliance with the Gosford DCP, parking, maximum site coverage, land grading, and due to consideration of traffic management issues considered insufficient for the particular site, including subglare.

A summary of the concerns expressed by the community which prompted the Mayor’s refusal motion included its close proximity to the intersection of the Central Coast Hwy and impact on the functioning of the intersection. Other concerns included: additional vehicle movements would generate traffic conflicts and congestion, including truck movements for waste collection; inadequate driveway design; lack of convenient and safe parking for residents, staff and visitors; no safe and convenient pedestrian crossing; impact of noise on amenity of the surrounding properties; and, location of the bus stops as a potential conflict.