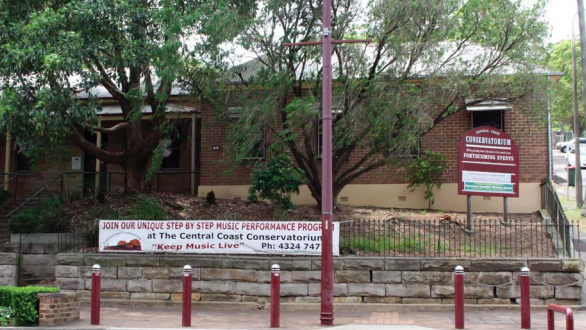 The Central Coast Conservatorium of Music has congratulated Central Coast Council on submitting a business case to the NSW Government to build a Regional Performing Arts Centre in Mann St, Gosford, but is still seeking recognition as a core stakeholder in the project.

“We are in a fantastic position to receive further funding,” said Conservatorium CEO, Mr Patrick Brennan, who said he believed the state-of-the-art concert hall that the community had been campaigning for over at least 20 years, would cost between $50m and $100m. “We know the State Government is interested in building cultural infrastructure.

“The Riverina has just received funding for a small concert hall and performance facility to sit alongside the Riverina Conservatorium in a refurbished permanent facility, so there are precedents being set,” Mr Brennan said. “We have a Tier One Conservatorium, so does the Riverina, we would argue we are bigger and we should be being perceived as at least on the same level,” he said. Mr Brennan said he understood that Central Coast Council had submitted a business case to the State Government for its $12m contribution to the $32m Regional Performing Arts Centre, which is being funded by local, state and federal government. In a written statement,

Central Coast Council said it had “resolved to progress the nominated site for the RPAC project, knowing the approximate project costs. “The ‘shortfall’ will be funded through Council’s Capital Works Program, which is approved on an annual basis and available to the public.” “We are now asking Council to explain how the Conservatorium fits into its business case,” Mr Brennan said. “We were disappointed that our preferred site in Georgiana Tce was not considered, but we have given Council assurances that we will work with it to fit into the facility on the Broadwater Hotel site. “Our board needs to understand how that would work and what the expectations would be, and whether the needs of the Conservatorium will be met.

“The Conservatorium wants to work with Council to see how they are going to overcome the possibility of the RPAC becoming a multipurpose centre that is not a true concert hall. “Will the interests of the many thousands of Conservatorium students, stakeholders and members be served? “It would be constructive to now move forward by being given the opportunity to provide our expertise to Council about what we need and what the community needs,” Mr Brennan said. He said the Conservatorium was calling for the RPAC to be a “flexible” venue rather than a multi-purpose venue. “The most important question here is, does the community need cultural infrastructure, and the one piece of cultural infrastructure we do need is a concert hall,” he said.

“We want Council to build something that is used 18 hours a day, that becomes the core of a performing arts precinct,” he said. Mr Brennan said he sees the Conservatorium as the anchor tenant in the facility and is happy to be part of the steering committee being formed by Council to take the project forward. “If you are going to design something that articulates with the community, it needs to be a facility that is usable by community groups, and our concern is how do local organisations live and work within the business case. “Take for example the Central Coast Concert Band, that has four or five concerts per year, and between 100 and 180 people turn up.

“It is community music making at its best, but how does an organisation like that work into a 1,000-seat concert hall, when they cannot currently afford to book Laycock Community Theatre?” Mr Brennan said Council’s current proposal for a smaller black box theatre space within the RPAC was not the acoustic solution small groups such as the Concert Band needed. “The RPAC needs to be designed with a designated floor plate for community music making, including rehearsal rooms, that is acoustically sound, with a double-height ceiling that can also be used as a 350- seat, low-tech auditorium, for small groups who can self-manage the front of house and technical requirements to help keep their costs down.

“Once that organisation gets confident, once they are selling out those concerts, they can go to the next level.” Mr Brennan said he was still seeking confirmation that the facility would have an orchestra pit and a truly acoustic, concert-hall design. “The community has been calling for a concert hall for decades, but it has never asked for, nor does it need, a conference centre that doubles as a poor-quality performance space,” he said.